Architecture, light and landscape are fused to make the Spectral Bridge House, located on a quiet street in Venice, a habitable work of art. Three cubes clad in white stucco and black charred wood are linked at the upper level by a glass bridge that glows softly, changing color by day and night. The street façade and the middle block are rotated seven degrees, imparting a sense of motion and animating the spaces to either side. Pocketing glass sliders open the living-dining room, kitchen and garage-studio to wood decks, a raised pool and a desert garden. A Corten steel fence conceals the narrow lot from street and neighbors, giving the owners privacy indoors and out, and the house is entered from the side, through the kitchen in the middle block. The project was conceived by Johannes Girardoni, an artist with a passion for architecture, and realized jointly with EYRC Architects, near-neighbors of his studio in Culver City. 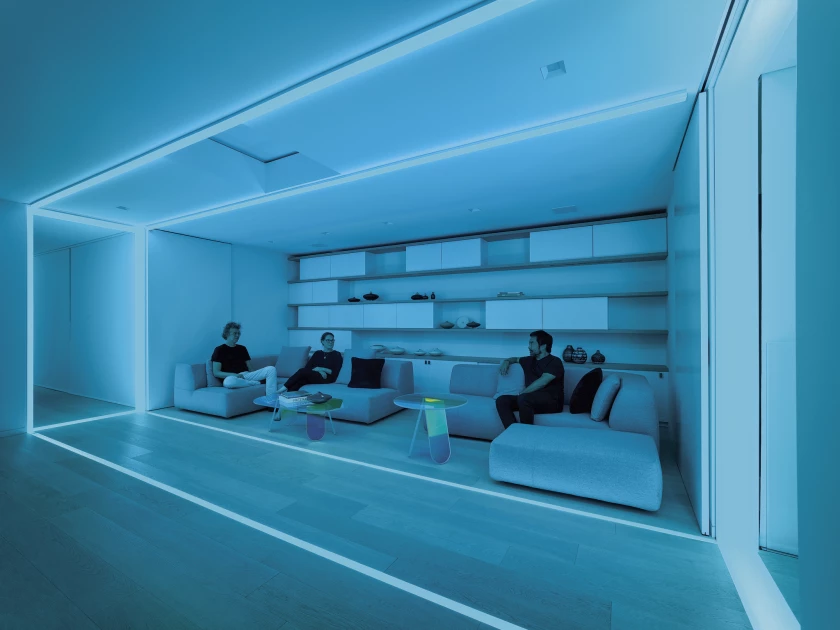 Girardoni grew up in Vienna, where he absorbed the irregularities and organic character of the city, moved to New York and relocated to Los Angeles seven years ago. “As an artist you have to take risks, but in New York you can’t afford to fail, so it inhibits creativity,” he says. “The top artists there form an impenetrable club; here they are much more accessible, along with fabricators. My practice has evolved in ways it never would have had I stayed back East.” The Light and Space movement initiated by L.A. artists in the 1960s was a point of departure as Girardoni began working with light and resin. “James Turrell and Robert Irwin opened up art to the idea of how we form our own reality,” he explains. “In their work we experience ourselves sensing. Olafur Eliasson has also explored the boundaries of perception.” Giradoni—recipient of the 2019 Francis J. Greenburger Award — did a major installation at the Venice Biennale in 2011, and he created “The Infinite Room,” a top-lit steel ellipsoid, as an integral element of a house architect Tom Kundig designed in Washington State.

When Johannes and his wife, designer and therapist Harriet Bourne, bought a tear-down soon after their move, they considered living there themselves but realized they couldn’t wait to replace it. Friends introduced them to Steven Ehrlich, principal of EYRC Architects, a fellow-spirit who had designed a studio for the late Ed Moses and collaborated with him on a recreation center. Takashi Yanai, director of the residential studio at EYRC, played a key role in the project. “It was an eye-opening experience,” says Yanai. “As an architect I’m inspired by such artists as Donald Judd, Isamu Noguchi and, more recently, Hiroshi Sugimoto, who has progressed from photography to sculpture and now to architecture. We like to pare buildings down to essentials, in shapes and materials, and that provided a great canvas for Johannes.”

Artist and architect found themselves in agreement on the concept of breaking up the mass, rotating the blocks and creating useful space on three sides, and they worked hand-in-hand on design and construction. As the house was being framed it found an enlightened buyer, a professional couple with two small children. “They understood our ideas, backed our vision and allowed us to push further than if we had done it for ourselves,” says Girardoni.

Spectral Bridge connects two of the house’s pavilions. LED lights respond to the environment and to the resident’s motion.

Architects and artists share common ground, but the integration of their work has been lost in the past hundred years.” — Johannes Girardoni

Materiality is an important feature of the house that Ehrlich designed for himself in Venice and those that he and his associates have realized over the past four decades. “We used ‘shou-sugi-ban’—burnt cedar boards—outside and in,” says Ehrlich. “It’s a centuries-old Japanese technique for making wood resistant to fire and termites. Synthetic materials have displaced it in Japan, but it’s now fabricated by a company in Texas.” Its silky texture invites the touch, and sunlight reveals the tiny cracks in the sealed charcoal surface. This plays off the steel-troweled stucco, whose whiteness is enhanced by the addition of a blue pigment. Polished concrete floors root the house to the land; cabinetry and bedroom floors are natural or stained oak.

There is a Japanese sense of restraint in the architecture and still more in the dry garden, sparingly planted with succulents, a palo verde and a melaleuca tree. Harriet Bourne’s skills found expression in the minimalist interiors. She searched for furniture that would match the scale of the living room, which opens up to the enclosed front yard, greatly enlarging the space. Gray rugs define two seating areas. A pair of sharply angled black sofas, designed by the late Zaha Hadid, occupy one; a pair of steel-framed white-fur chairs the other. Together they function as sculpture you can cuddle up in. Johannes’s wall piece of blue resin provides the sole accent of color in a room that is animated by users and the shifts of natural light. Still to come is another of his sculptures: two bars of resin with embedded LEDs that will cast subtle shafts of white light over a bare stucco wall.

Stairs lead up from the kitchen to a media room with a projector and a blank wall as screen. Glass-walled bridges lead to the children’s bedrooms in front and the master suite to the rear. Sensors are programmed to respond to the shift from dark to light, beginning an hour before sunrise, resuming in the late afternoon and continuing as late as the owners choose. The sensors activate the LEDs that read as continuous strips of light within the resin beams that frame each bridge, slowly changing from white to a variety of hues. Sitting in the spectral lounge you are immersed in a cloud of colored light as though you had strayed into an installation by Dan Flavin or Turrell. “I wanted to create a site where the boundaries between art and architecture dissolve,” Girardoni explains. “It’s seamless whole—a living environment in which the light of day and its absence at night gives way to an illumination in which the participants’ experience continuously expands and contracts.”

This is a radical departure for the artist, who spent the first 15 years of his career making minimal sculptures from beeswax and wood. His interest in technology, first kindled at the MIT Media Lab in the late 1980s, surfaced in the most unexpected way. “I was flying home from Mali, where I had joined some architects exploring the Dogon culture,” he recalls. “We had been off the grid for a month, and looking down as the plane approached the Newark airport, I had a fresh appreciation for the industrial infrastructure and thought, ‘I must incorporate technology into my work.’” The Spectral Bridge is organic and interactive, responding in different ways from one day to another through the year and to the movements of the family as they cross the bridge. Even the low tables, designed by Patricia Urquiola, have a role to play, for the light changes color yet again as it passes through their acrylic surfaces. The intensity of the color field changes one’s perception of the sky and of other lights in the house while complementing the monochromatic living areas. To add to the experience, the sensors respond to the changes of light and generate unearthly sounds corresponding to the frequencies of the colors as they pass from the warm to the cool end of the spectrum.

It would be easy to see this installation as an intrusion, yet another example of how technology is taking over our lives. Girardoni is well aware of the threat and aims to combat it. “I try to use technology in a positive and constructive way—to slow things down and increase your sensory awareness, in contrast to the babble of the internet,” he explains. “Architects and artists share common ground, but the integration of their work has been lost in the past hundred years.” For him, as for Yanai, this has been a model of collaboration that points the way to other holistic projects. 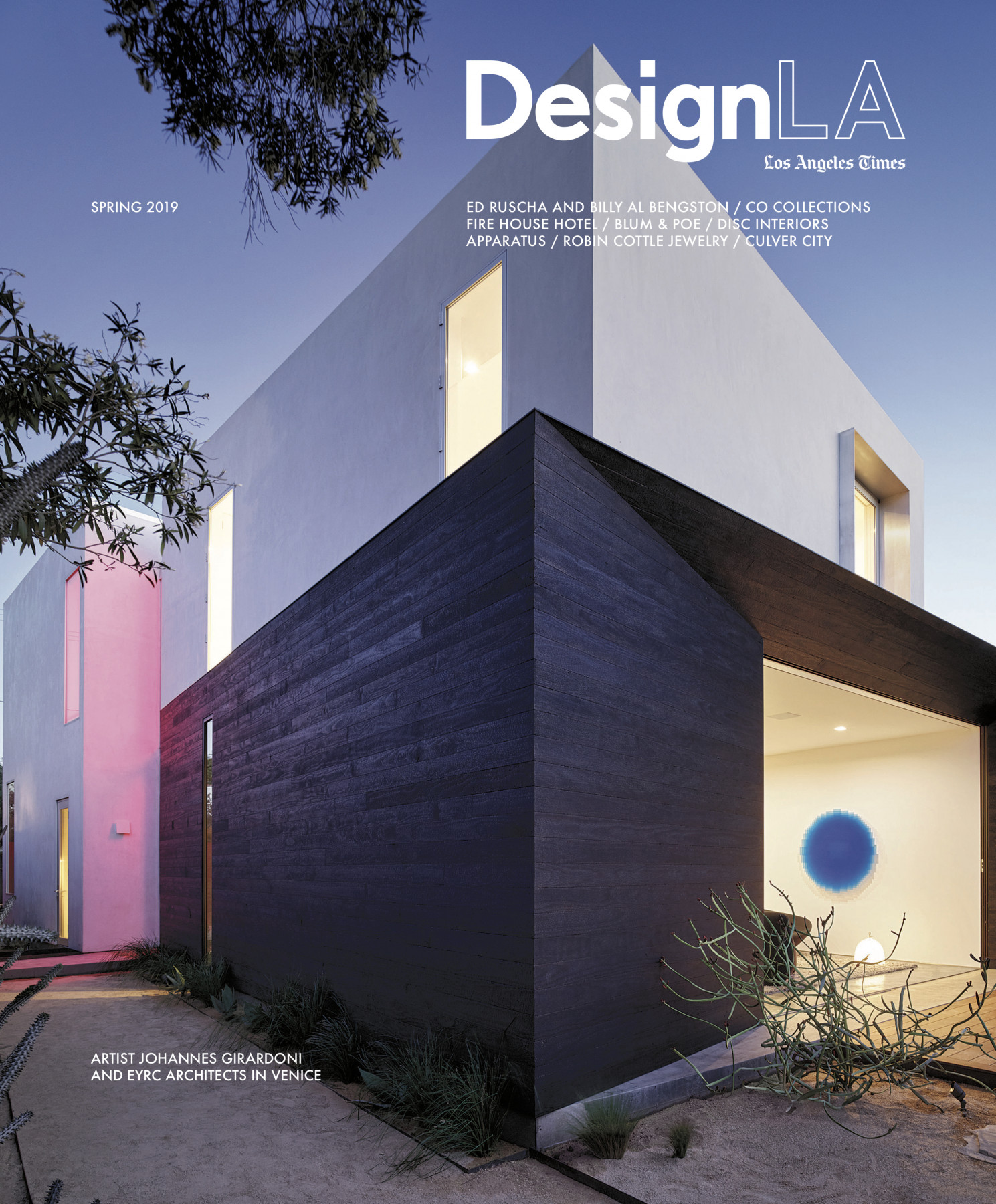 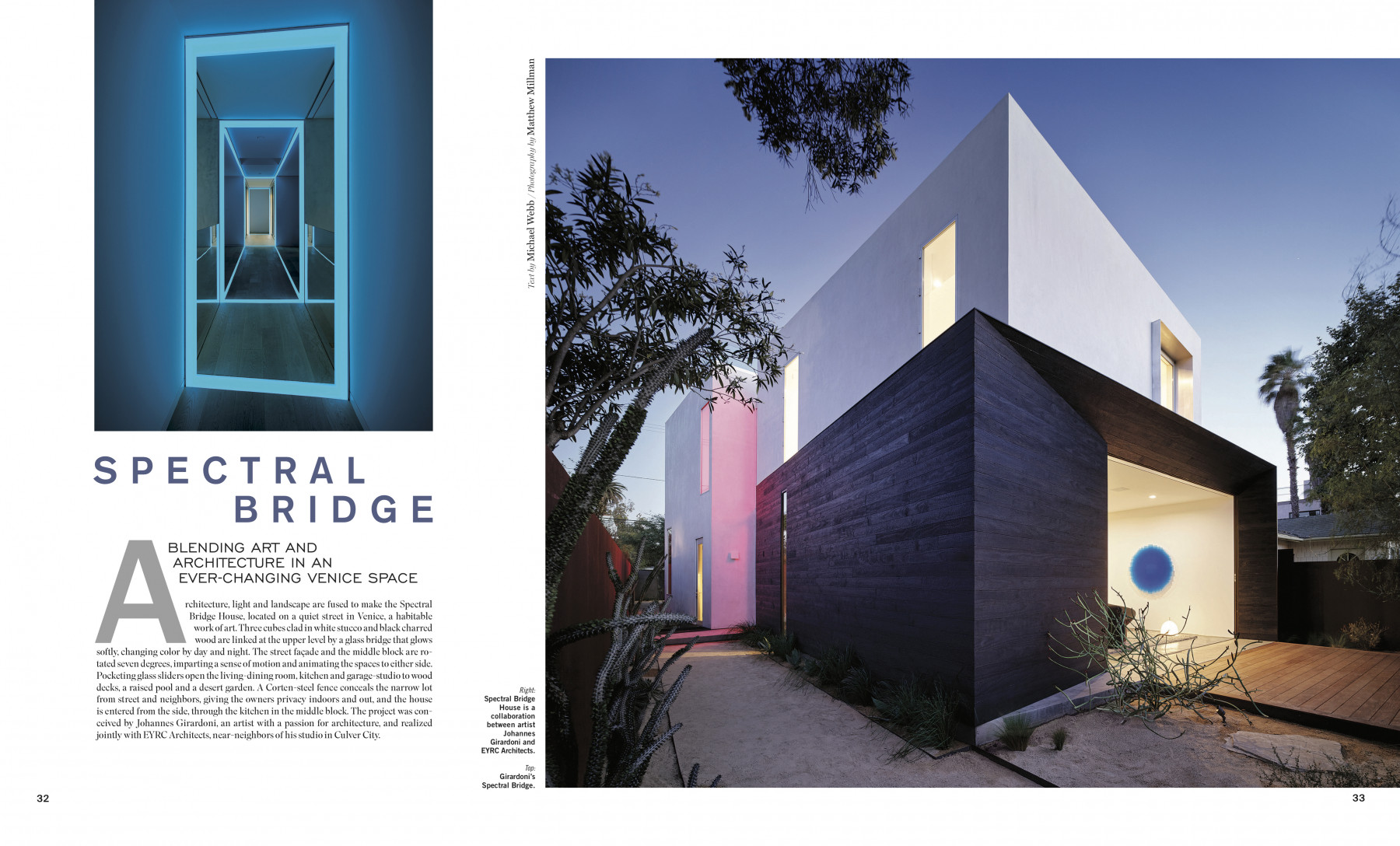 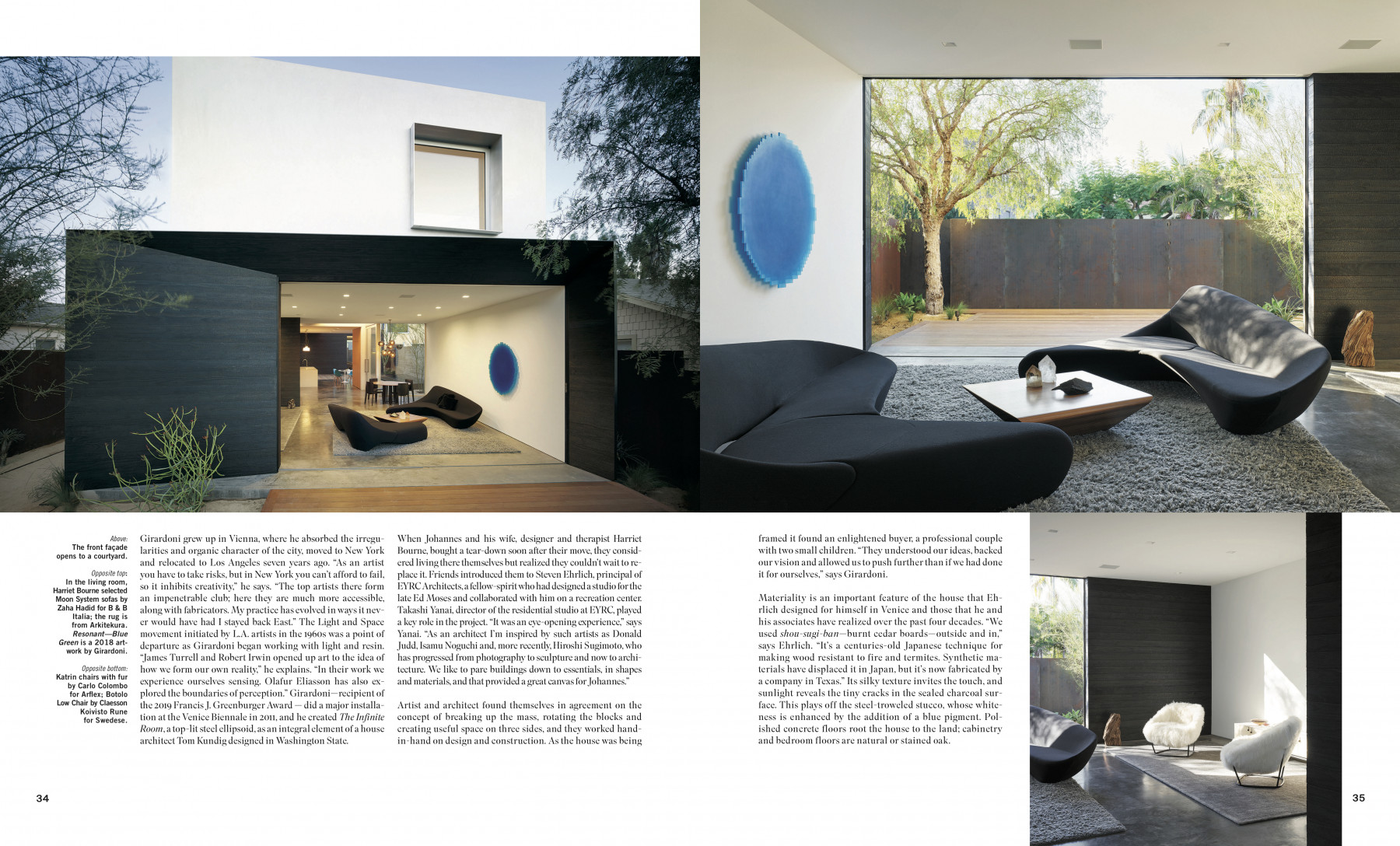 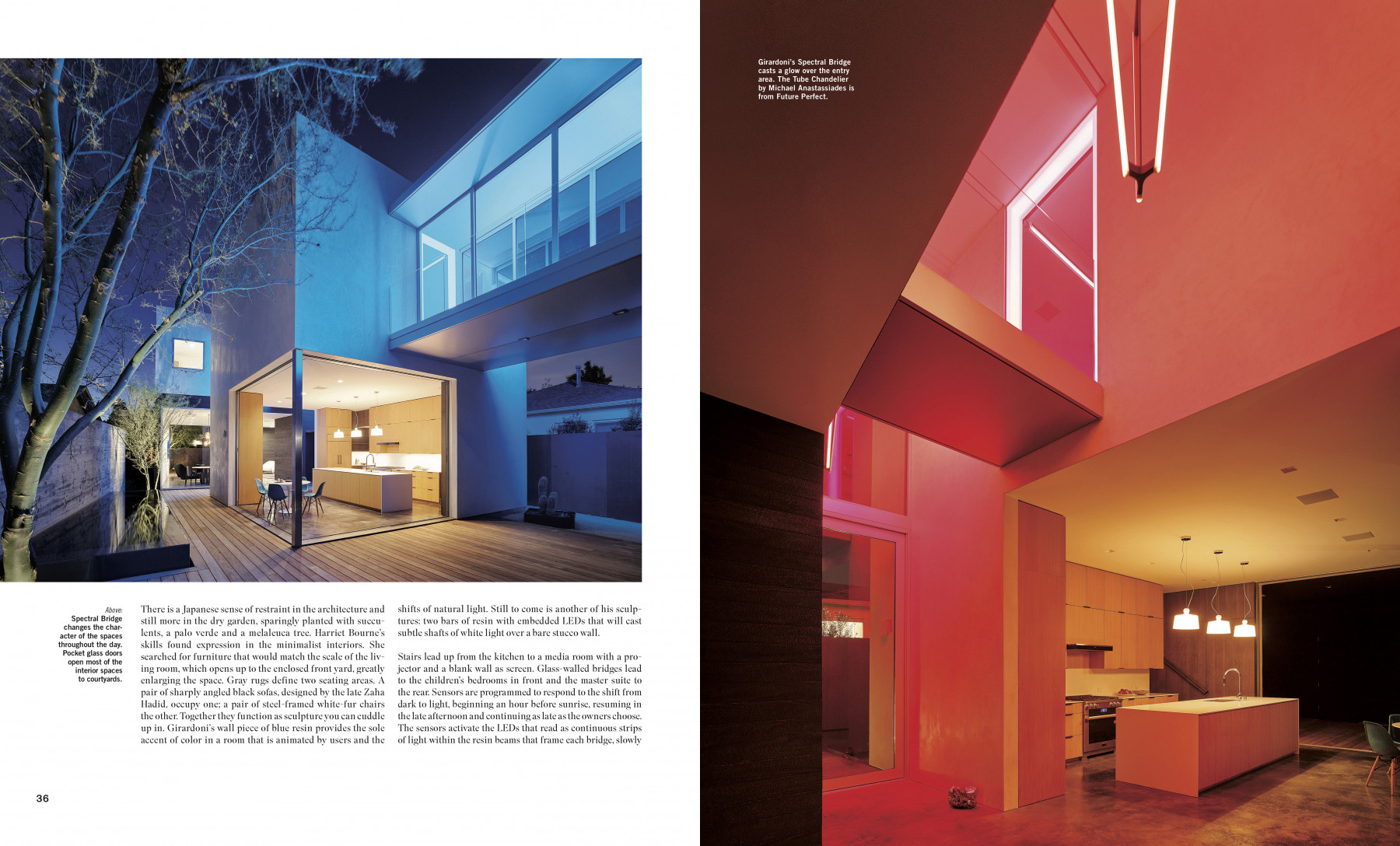 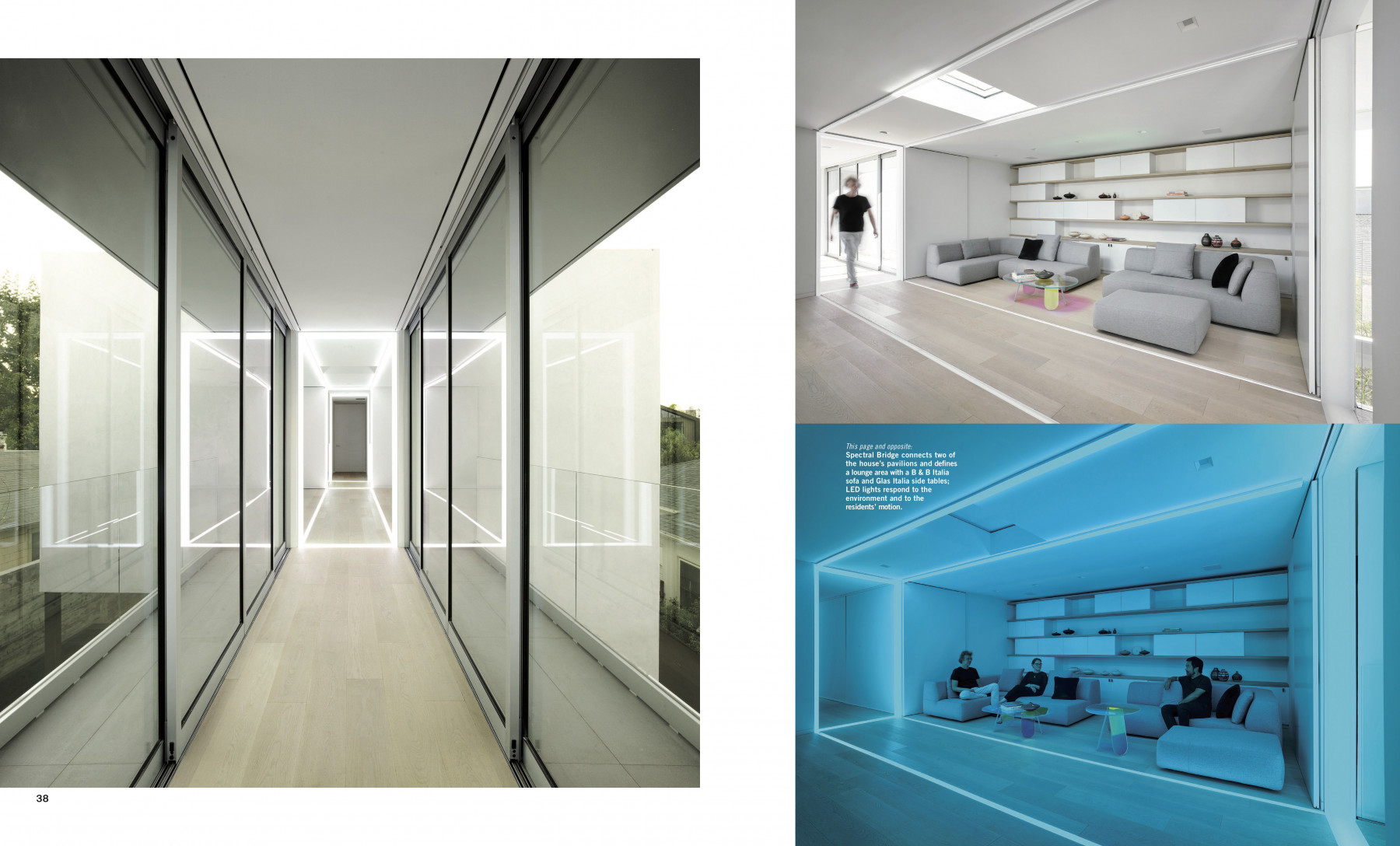 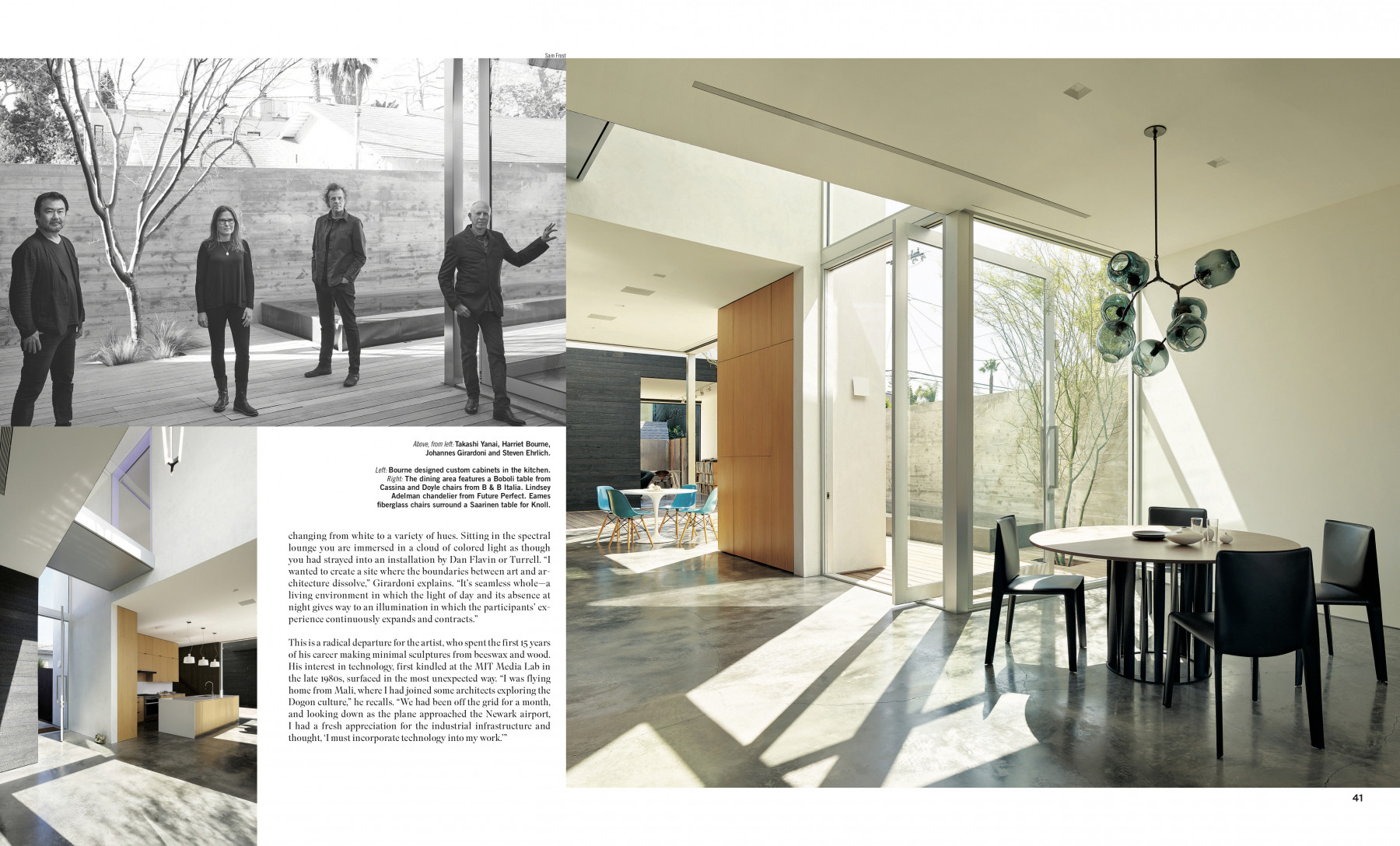 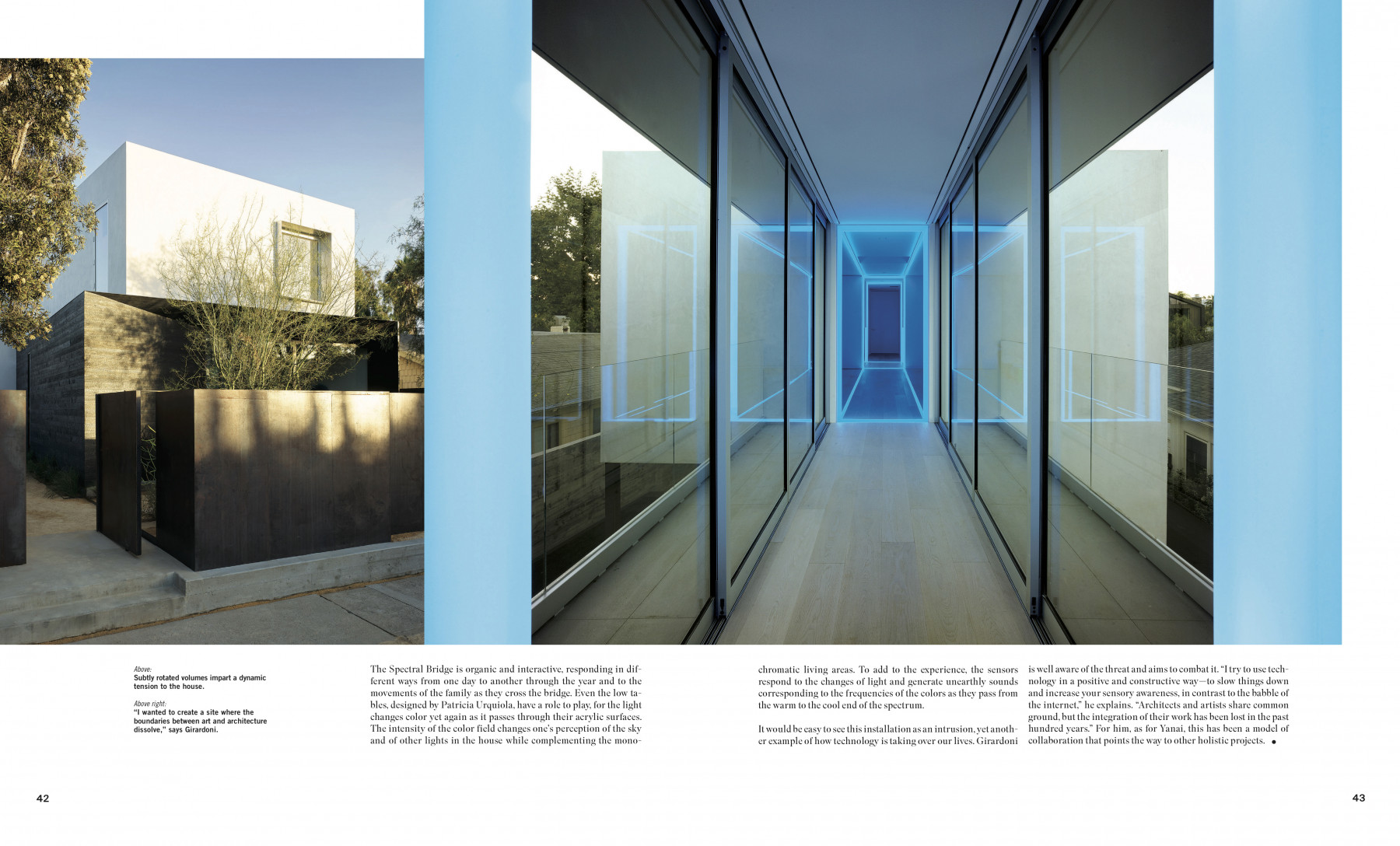