Seeing, Outside Our Selves

Since I think that the most relevant questions in art-making today are asked between defined disciplines, I tend to organize my work at ambiguous intersections. Can sculpture function as architecture, and if it takes on that role, where is the line that architecture ends and art begins? Are there opportunities to create new definitions of space by linking physical and digital information? Can an artwork be an extension of our perception, and how would that impact our definition of reality? Can new relationships between light and material be created through an algorithm? Is there still a place for radically non-technological work, and what conditions can it create that disconnect it from existing knowledge? Are inquiries into the relationship between sculpture and painting still relevant, and if so, how do they relate to life and culture today? Whatever the answers, they are all pertinent questions because of one inevitable evolution in our time: the distinction between our physical environment and virtual space is rapidly fragmenting. Our natural selves are cross-pollinating with digital systems. I tackle this novel condition – with all of its problems and opportunities – by creating conditions in my work that respond to, and shape this new reality.

My experience has been one of flux. Growing up in the deep freeze of cold-war Vienna in the 1970s, I went through a complete cultural re-acclimation when I moved to Southern California in my teens. I left behind the shadow the Iron Curtain cast over the small medieval towns of eastern Austria for the thick, palpable light of the American West, the hard radiance of the open desert, and the novelty of no immediately apparent history. I was fast-forwarded to the present. By way of Maine and some time at M.I.T in Cambridge, I eventually made my way to New York, a city that epitomizes the 24/7-reinvention cycle. For some twenty- two years it was the perfect place for a cultural nomad as myself to feel at home. The one constant of Manhattan is its perpetual re-rendering of itself, driven by the hard-edged blend of desire, creativity, commerce and greed its inhabitants unleash on their island in an effort to survive and thrive. I recently replaced this saturated fabric, one that leaves no square inch un-designed or un-commodified, for Los Angeles. Less predictable, more loosely articulated, and more complicated to grasp than its East Coast sibling, L.A. is a decentralized platform of nature and urbanity, full of grit and intoxicating beauty all at once. Los Angeles is a state of mind, one that can be constantly reimagined.

I have used the continuously shifting conditions in my life as a point of orientation. I move fluidly between photo-based work, sculpture and installation art, never letting a singular medium in any of those disciplines act as a sole protagonist. I consistently rely on a convergent architecture: my photography is digitally deconstructed and physically over-painted; my light installations are physical environments that merge natural and artificial light and re-articulate that information as sound; my beeswax sculpture is characterized by it’s heavy materiality, yet it is work about light, and results from an act of painting; my Metaspace installations are spaces about space. They are large physical structures that are about the immersive and redefining conditions they create rather than the space they occupy. All the work is connected by a reductive inquiry into the relationship of light and material, through which I explore the continuously evolving relationship between our sensory apparatus, reality, and image.

After returning from West Africa in 2008, from a research expedition with a group of architects, scientists and other colleagues, my focus broadened into a critical inquiry of contemporary culture. I left Mali with complex and indelible impressions – with unresolved thoughts about a people, whose existential condition is shaped The Disappearance of Everything, La Biennale di Venezia, 2011

by one of the world’s most inhospitable, whose existential condition is shaped by one of the world’s most inhospitable climates and whose culture, which is physically and spiritually designed purely to maintain survival, exposes life in it’s rawest, most un-aestheticized form. As sometimes well-meaning, sometimes arrogant first-worlders, we have managed to develop and use knowledge-systems, technology and infrastructure, to move refuse, dis-ease, and death a little bit further away from ourselves than some of our less-privileged fellow inhabitants. We are often oblivious to the fact that we have done so at the expense of those who have not. I could not help but land back home with the notion that technology as a solution to everything serves merely as a temporary distraction from the inescapable reality of our own mortality. And yet, technology creates new perceptions of our selves, and even has the capacity to extend and preserve organic knowledge. After a month-long immersion into cultures completely off the grid, I was struck by the vast, albeit somewhat deteriorated infrastructure visible from my plane on final approach to Newark. More artifact of 19th century post-industrial revolution, than our 21’st century information-linked reality, it brought me to thinking about where we are right now. We occupy a hyper- connected world, one that meshes physical and digital infrastructures on a scale that is difficult to perceive. The core of our discourse takes place at the intersection of digital information and analog material. In the current cultural context, where the real and the virtual are converging and cross-pollinating in unprecedented ways, I face this new reality by creating constructs that combine digital and material expression in spatial, atmospheric and conceptually immersive work.

Coming back from Mali, I was continually reminded how our culture is saturated by digital systems. We use our phone’s intelligence to get us to the right place. That alone, has shifted how we understand and read our environment. The algorithm behind Google searches detects behavioral patterns, the sum of which yields a digital identity that knows more about us than our friends; or worse, more than we know about ourselves. We make decisions based on information provided by algorithms. My years’ long focus on the interaction of light and material brought me to the idea of reality augmentation in art. With the use of sensors and tone generators, I could use an algorithm to make light audible and push the whole paradigm of phenomenological art into the current context. If we are experiencing a work by James Turrell or Robert Irwin, for example, we encounter perception in its purest form. We experience ourselves sensing. Even now, artists like Olafur Eliasson work with perception as the medium itself. The whole history of art culminates there. As with the “death of painting,” however, there is no end. The evolution, and this is where we break with history, is that we are now occupying a cultural condition in which we are not the only ones sensing. Artificial perception extends our own sensory apparatus at large and creates a new reality. An environment that we sense while it also senses us, and then changes as a result, heralds the end of the supremacy of our perception. This is the new now.

The notion of a physical-digital convergence is at the core of my light and sound installations. Much of my work is focused on turning light into sound, based on mapping the frequencies of the visible spectrum onto the sound spectrum. I call this sonification of light Spectro-Sonic Refrequencing. I use sensors to pick up an array of light information and use that information to generate sound. Why is this transposition relevant? First, this is a different idea than playing a sound to visuals for dramatic effect, as in a soundtrack. It is also different than a recording. The leap here is a form of reality augmentation. In my work, light is made audible in real time, and changes based on what the sensors see. The shift is from relying on one’s sensory apparatus, to expanding perception through technology. Our perception remains fully engaged, but we are also hearing light. Depending on who you speak with, the use of reality augmentation in art, or its presence in the wider cultural context, is considered problematic, controversial, an opportunity, or all of the above. Regardless, I am focused on creating an art that sees viewers in their environment, changes its behavior based on what it sees, and rearticulates all of what it sees as sound, in real time. That creates a condition which redefines the role we play as participants in art and in life. The installation’s architecture questions the limits of perception and activates the border area of natural phenomena and digital systems. Natural and artificial light merges inside five purple cast resin elements that appear to subtly shift in color and luminosity depending on the viewer’s position within the space. Two sensors, calibrated to measure both the purple and daylight frequencies, drive a tone generator, which converts the frequencies of light into frequencies of sound, making light audible. The sensors also register the presence of the viewer moving through the space, which additionally modulates the sound. In this set-up, virtual and physical information is processed both by the viewer and the work, further blurring the boundary between phenomenological and virtual events.

I am currently involved in mapping the entire visible spectrum, transposing it on the audible sound spectrum, and developing sensors and processors that read video data, color information, movement, light frequencies, as well as other light parameters, all of which convert to sound frequencies. This research is applied in a new project, titled Metaspace V2. A raw aluminum shell provides the framework for the sculpture’s seamless elliptical interior skin. The sculpture is entered through a low and narrow opening. Inside, the space expands into an immersive light and sound environment that continuously evolves. Monochromatic LED light is projected into the space through a resin lens at the top of the sculpture. The curvilinear geometry of the work scatters the colored light inside, in effect dematerializing physical boundaries and creating a pure color space. Sensors measure the light frequencies of the specific color and drive tone generators that convert the frequencies of light into frequencies of sound. The visceral sound vibration shifts and modulates as the light condition changes. The sensors also register the presence of visitors’ movement in the space, which changes the progression and speed of the color sequence and hence the sound. Virtual and physical information is processed both by the viewer and the installation, creating a feedback loop between the two. Natural and virtual structures, layered on top of one another, create a multi-sensory, immersive environment of phenomenological events and digital systems. Matter becomes light and light becomes sound. Ultimately, at the core of this setting, Metaspace V2 questions the border of natural and artificial phenomena.
Metaspace V2 is a space about space. The sculpture not only challenges existing definitions of space and how we perceive it, but also proposes how measurement of waveforms, the space between peaks and valleys, and digital systems extend perception to enable the formation of new realities. Equipped with sensors and tone generators that make light audible, Metaspace V2 questions our current cultural paradigm, one in which technology and nature find themselves at an increasingly blurred intersection.

Johannes Girardoni is an Austrian-born American sculptor and installation artist. Girardoni’s works are reductive investigations at the intersection of light and material through which he explores the continuously shifting relationship between reality and image. Girardoni is best known for his Light Reactive Organic Sculpture, in which the primary material vocabulary – found wood, beeswax, pigment – and its physical constellation become both the carrier of an explicitly painterly event while also being the foundation of an immaterial phenomenon. The works are often examinations of phenomenological processes, where a hollow or empty space – a tangible emptiness – turns out to be the actual center. Opposites and contradictions form fundamental structures in Girardoni’s work. His orchestration of material and light, presence and absence, things found and things formed, all resist clear fixation, thereby maintaining and creating works with their own non-derivable reality. 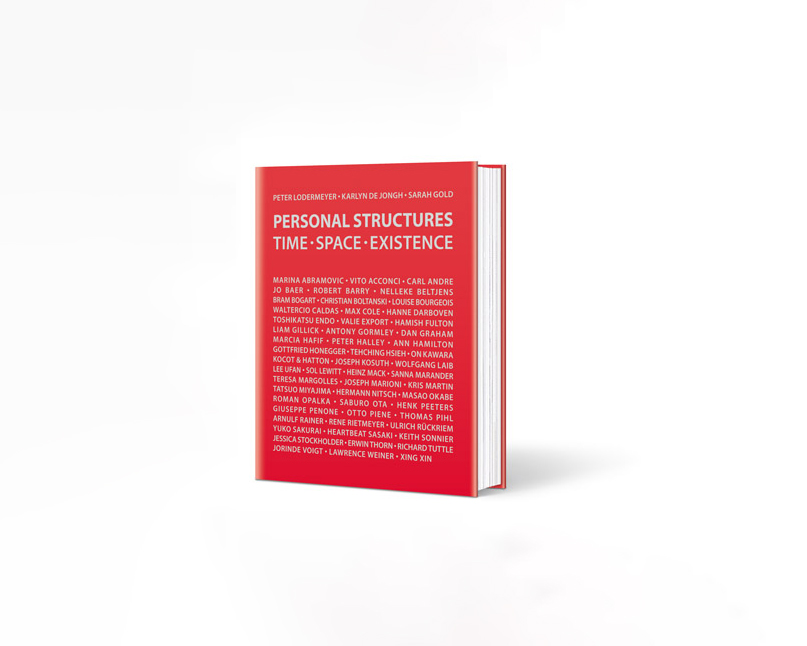 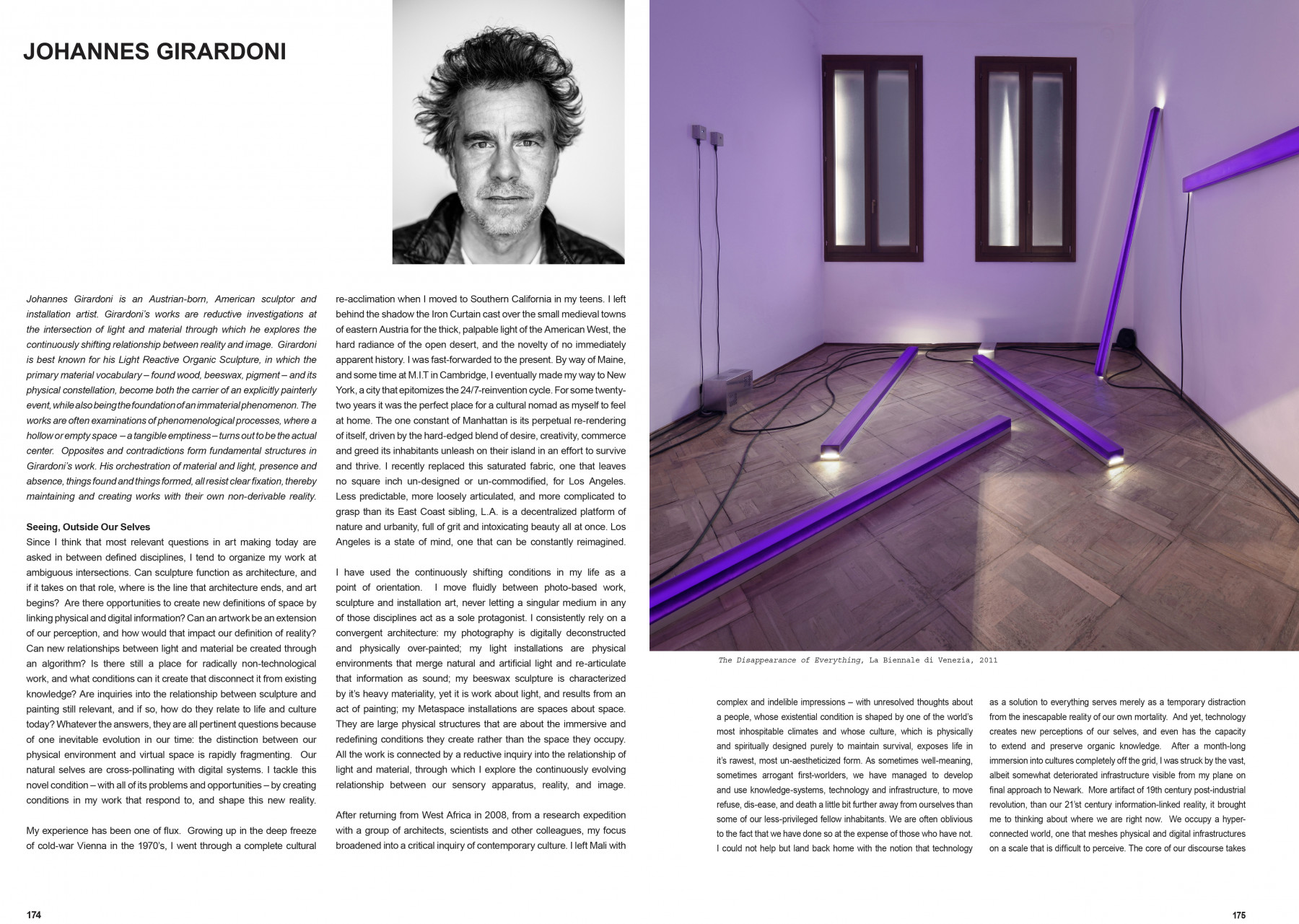 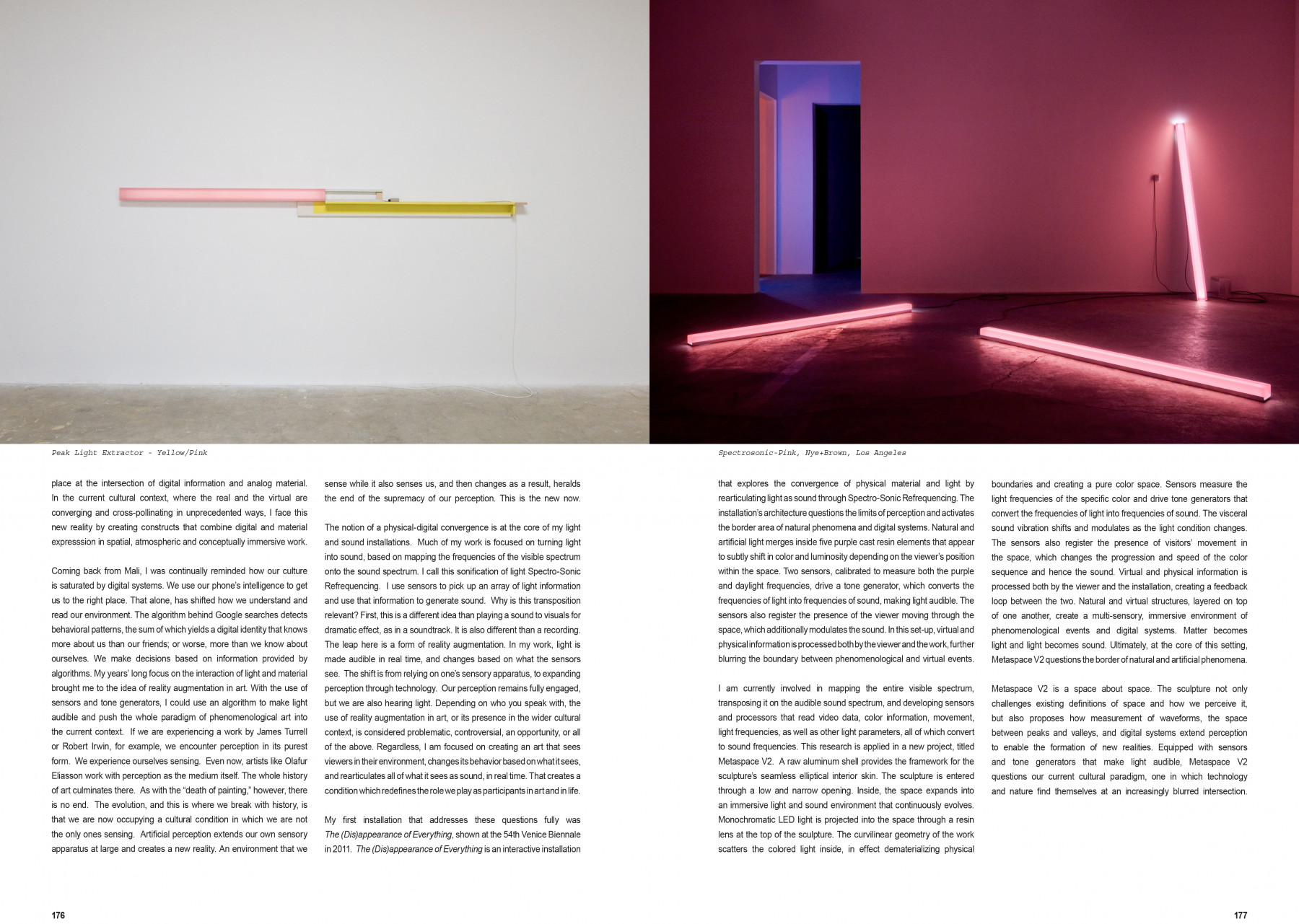 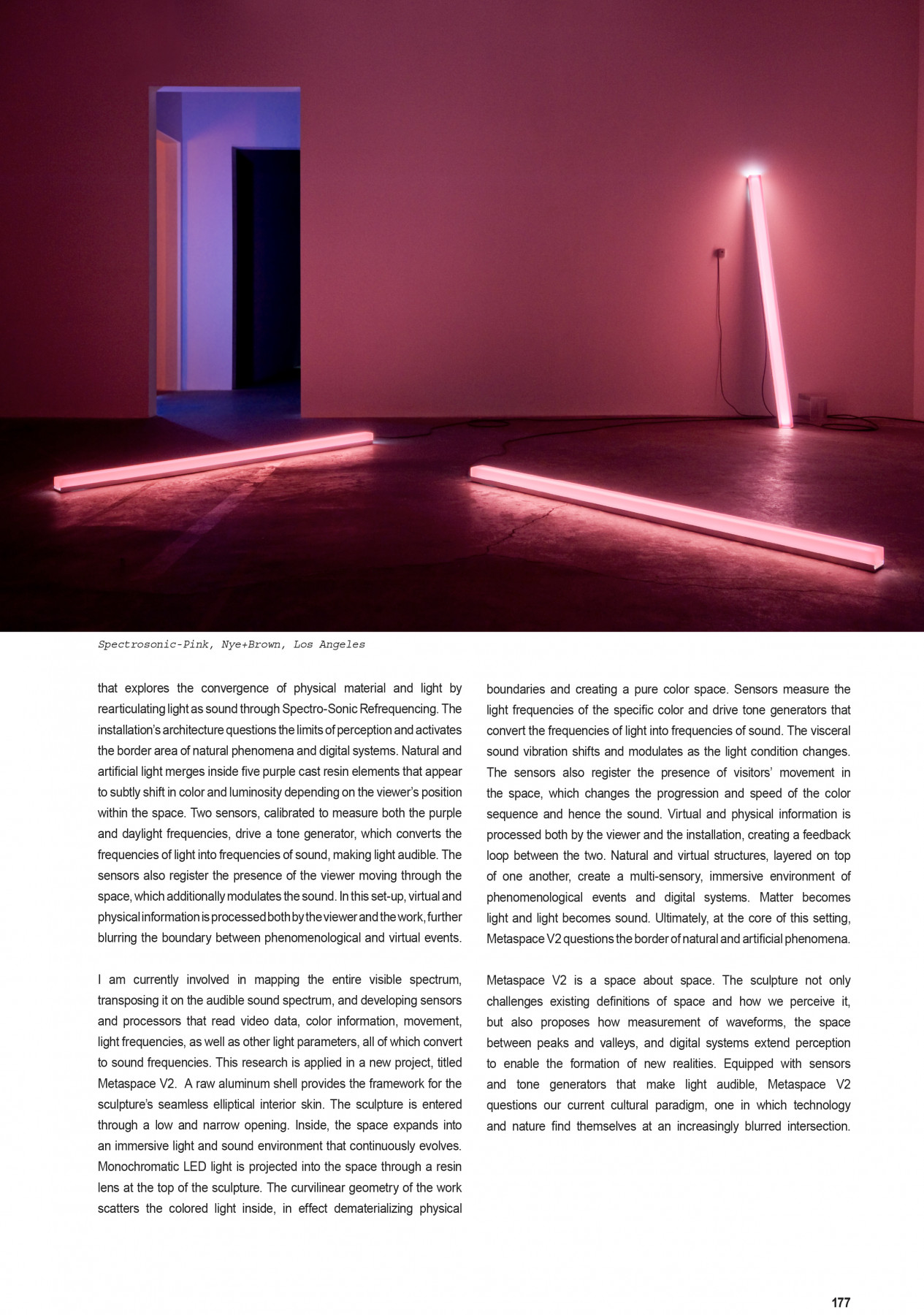