Stylistic concepts always carry the danger of confining artworks too much. In exhibition reviews, the works of Johannes Girardoni and the sculptures of Nelleke Beltjens are regularly referred to as “Minimalist”. If, by Minimalism, you understand the use of simple basic plastic forms and the application of structural features such as serialization, repetition and symmetry, then there is good reason for this characterization. If, however, this concept is expanded to encompass semi-industrial types of production and treatment of the materials, stripped of any trace of subjectivity and emotion, then the works of these artists are virtually the opposite of Minimalism. Neither Beltjens nor Girardoni is interested in a smooth, self-referential formalism. Their sculptures appeal not only to the sensory perception of the viewer but also to feelings and fantasy. And, for both artists, their respective work, in which formal simplicity and subjective sensibility meet, is a place where personality can resonate – an instrument of self-discovery and self-constitution – in the artist as well as in the viewer.

Both artists have exhibited together in a number of European cities, including Amsterdam and Vienna, as well as at the first large museum presentation of “Personal Structures” at the Ludwig Museum in Koblenz, Germany in 2005

Girardoni and Beltjens not only share basic artistic thinking, their biographies also have certain things in common. Both were born in Europe, but have a strong footing in America, where they spent the decisive years their artistic development. Girardoni, born in Austria in 1967, came to the U.S. with his family at the age of fifteen, initially moving to Southern California. Today he lives and works in Manhattan. It is indeed significant for his art that he grew up in Austria in the 1970’s, near the Hungarian border, in the shadow of the Iron Curtain, and that he later had to reestablish himself culturally and linguistically in his new American environment. As Girardoni himself emphasizes, these biographical facts created the personal conditions for his interest in exploring and conveying oppositions in his work.

The opposites embodied by Girardoni’s sculpture are most clearly revealed in the contrast of his preferred working materials, beeswax and wood. Originally a painter, Girardoni took inspiration from the encaustic works of Jasper Johns and Brice Marden to launch his own attempts with wax as a binding agent for color pigments at the beginning of the 1990s. This technique quickly led him beyond painting to the field of plastic creation. Girardoni combines his natural or vibrantly-colored wax bodies with found wood elements – slats, blocks, logs or lattice structures that look like weather-beaten and worn relatives of Sol LeWitt’s stereometric sculptures. Frequently Girardoni uses these wood elements in repetitive structures such as stacks and serial rows. By combining both materials it is possible for him to formulate a considerable number of formal oppositions that preserve the tension of the work: smooth wax surfaces and cracked wood, color, and colorlessness, open and closed, things found and things formed, fullness and void.

Above all, the last pair of opposites forms a central theme for Girardoni. He repeatedly stages this contrast in his works, perhaps most dramatically in his triptych of 2003, which can be opened and closed like a medieval winged altarpiece. In a closed state, the work presents itself as a two-part monochrome picture in cadmium green; but when it is open, the viewer is surprised by an unexpected emptiness. Where the main event would appear in a traditional altar painting, Girardoni shows nothing – only the naked wall, an empty surface framed by a few narrow, rough wooden boards in vertical rhythm. Nowhere else in his works is this fundamental characteristic expressed so clearly: namely, that what is essential in a work of art can consist of the non-visible, the presumed emptiness. Girardoni’s empty spaces challenge the imaginative powers of the viewer. With their openness and their lack of characteristics, they provide him with free space for associations.

This claim is very clear in a series of works called Face Box (Colorvoid). These are fairly small-format works for the wall, their wood supports covered with an intensely yellow layer of wax. The wax has a hollow indentation in the middle, just big enough to accommodate the face of a potential viewer. Exhibition visitors are actually urged to get closer and closer to the Face Box and finally, to insert their faces. Girardoni is not concerned with viewers who remain passive, but in participants who enter into an active and intimate dialogue with the works, even to the point of physical contact. The person who takes up this unusual offer avails himself of a whole series of experiences. The closer you get to the Face Box, the more the work detaches itself from its relationship to the surrounding room, the field of view increasingly dominated by the yellow of the wax. But there is a certain moment when the threshold of perception is passed: the person who dares to place his face in the object, surrendering himself to the work, completely darkens his view with his head. At this point, visual (color) perception suddenly recedes, replaced by tactile sensation and the strong smell of the wax. This aesthetic border crossing, which may scare off some visitors because it violates the customary rules of behavior in museums and galleries, makes the viewer rely wholly on himself and the reflection of his perception. This is precisely Girardoni’s aim: he propagates the work of art as a catalyst for self-perception and existential self-experience; his works remain as open as possible, their content not prescribed by the artist.

The viewer’s response certainly has something to do with the smell of the beeswax, which often causes Girardoni’s works to trigger strong emotional reactions. Olfactory experiences are known to lead directly to the centers of emotion and memory in the human brain; and the smell of wax, like that of candles burning, is tied to all sorts of vivid personal memories for most of us. The viewer may also immediately sense the fact that many of Girardoni’s works correspond to human size and proportion and refer directly to the human body. This subtle anthropomorphic feature applies in particular to the Trough (Colorvoid) sculptures, which are placed at a slant against the wall. This manner of presentation recalls the colored planks that John McCracken began producing in the mid-1960s. But the positioning and the strong color are all that Girardoni has in common with this West Coast Minimalist. Whereas McCracken sought smooth, perfect surfaces that would single his objects out from any real context as timeless, flawless foreign bodies, Girardoni puts his Troughs into direct relationship with the viewer. This nearly physical reference overflows with associative opportunities. As in the “Face Boxes,” the wax surfaces of these works have been hollowed out at the front. Their size inevitably evokes a notion of being contained in the viewer, stirring very different connotations that can range from feeling secure to being laid out on display. It is also possible to take the title “Trough” quite literally since Girardoni simply borrows the form of a cattle trough used for feeding and watering. And yet the sculptures never wholly embody anyone of these notions; instead they resist clear fixation. This particularly applies to the strong color of the yellow or red-orange layer of wax which cannot be brought into connection with any of the possible associations and maintains its own non-derivable reality. As the subtitle “(Colorvoid)” would suggest, the hollow, empty space is here again the actual center of the work. The hollow form turns out to be a container filled with an immaterial “stuff” of light and color. Due to the soft grooving of the interior surface, the color is slightly modeled, the light reflecting in a soft glow from the slight translucency of the wax. The sculpture thus becomes the carrier of an explicitly painterly phenomenon, while the material of the wax-covered wood becomes the foundation of an immaterial phenomenon. Considering the subtle anthropomorphism of Giradoni’s art, it is not difficult to see in this condition a metaphor for the interaction of body and mind. 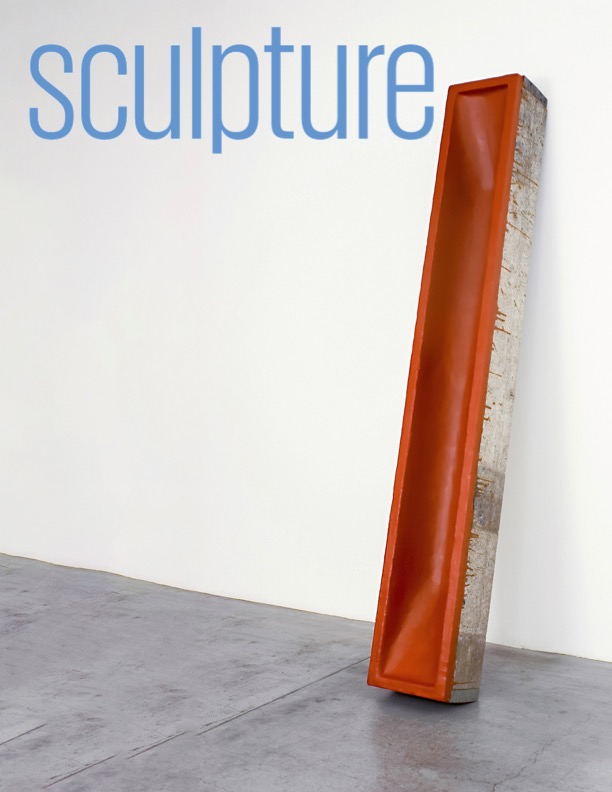 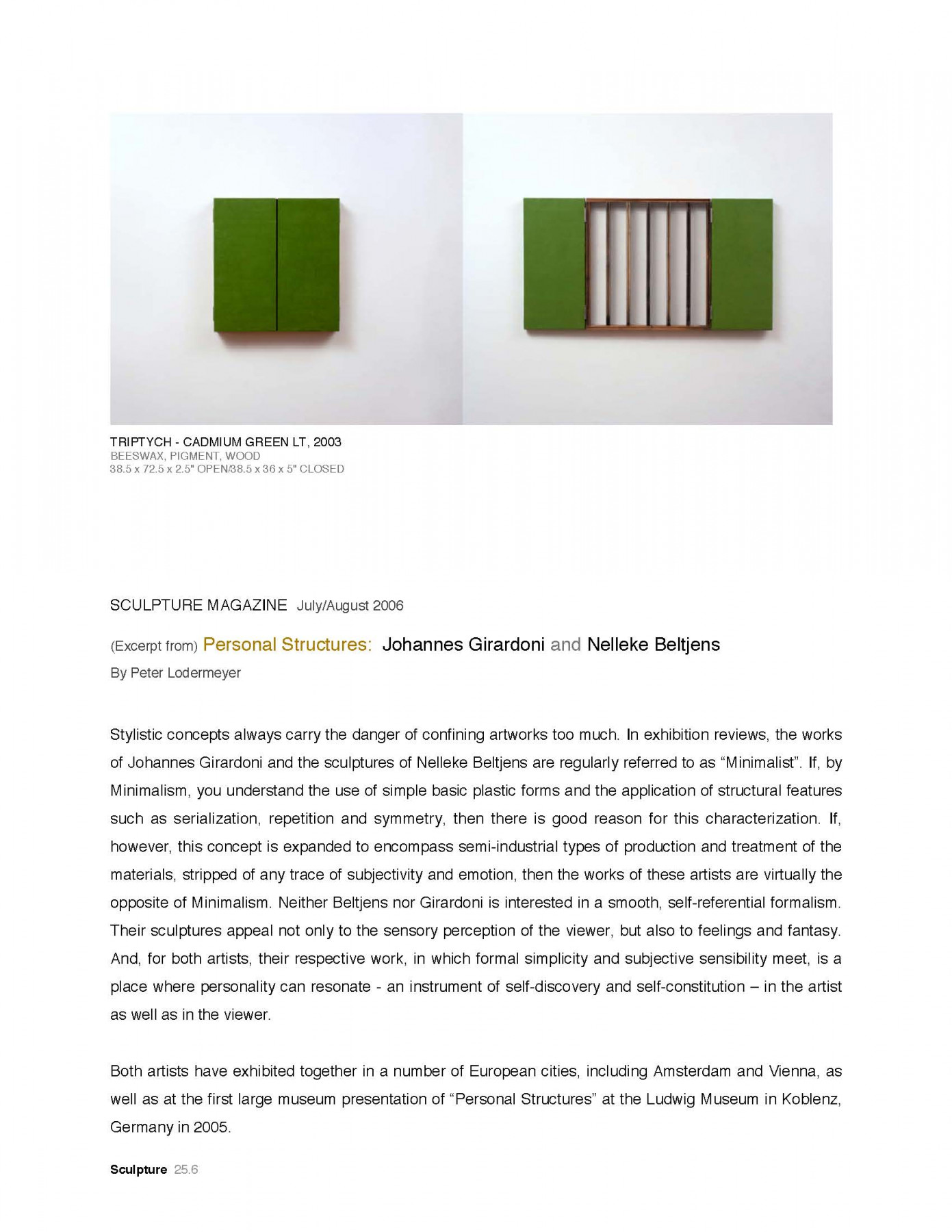 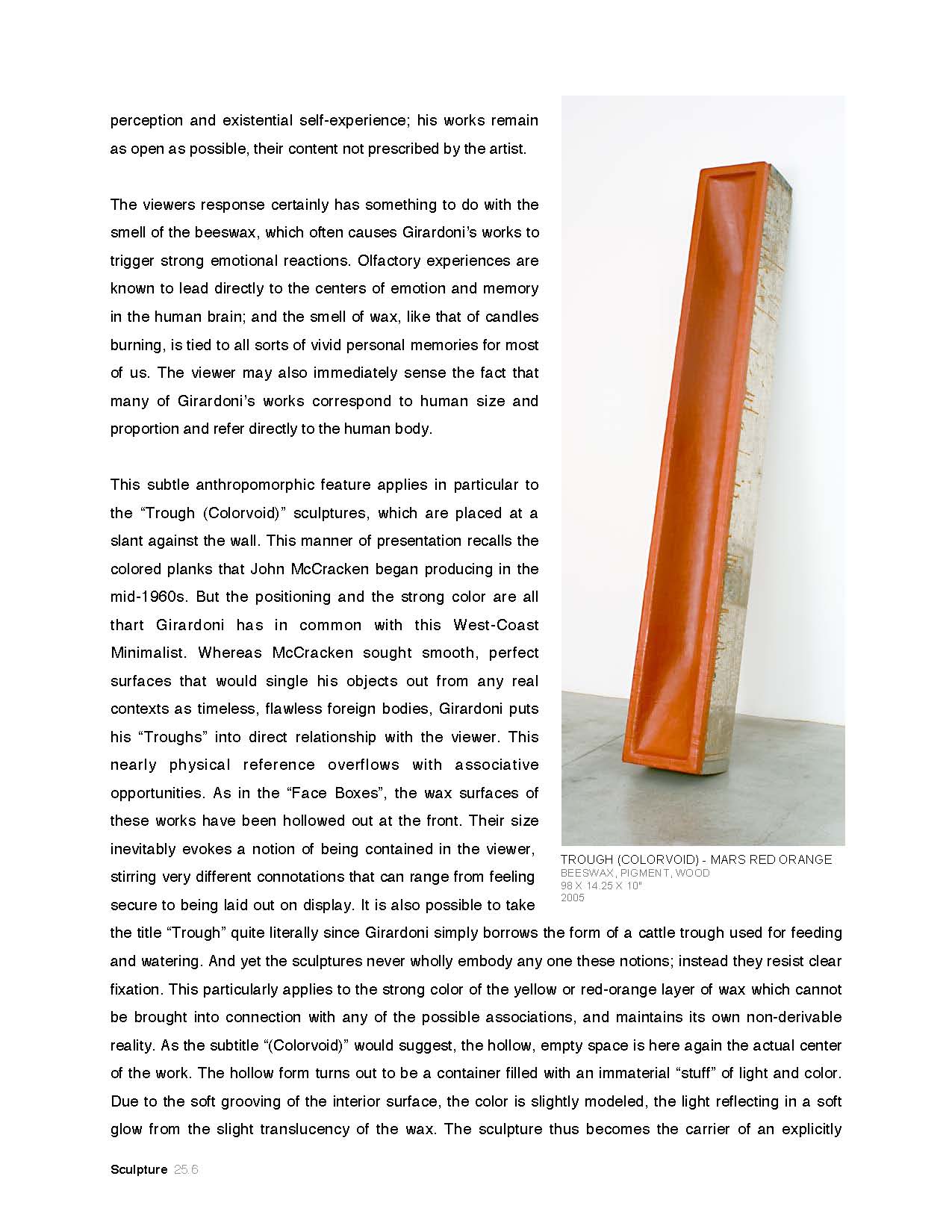 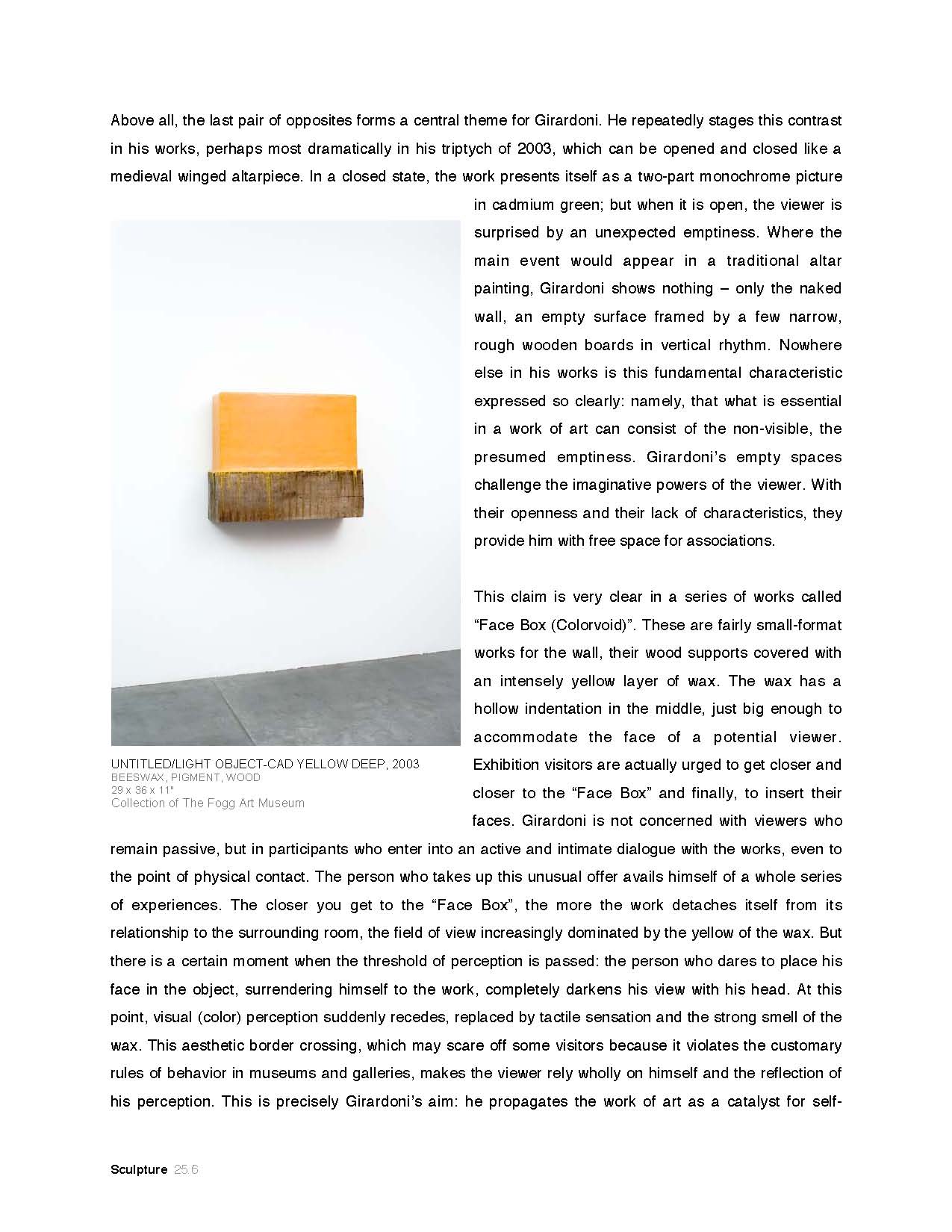 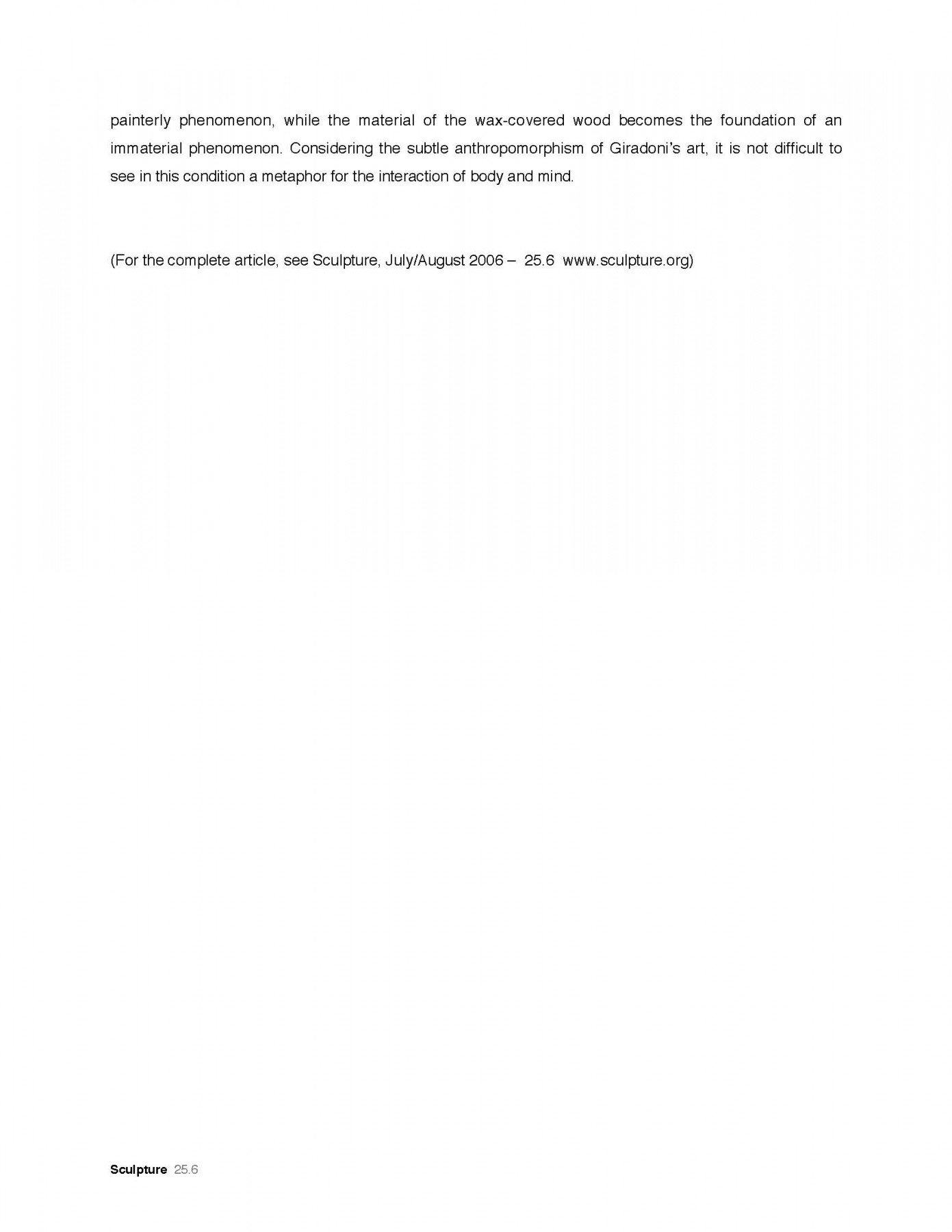