The World of Chromasonic is Built of Pure Light and Sound

Don’t let the word immersive scare you, Chromasonic’s experiential environments are not here to overwhelm you. Steadying rather than dizzying, the walk-in abstract color-field star-chambers are constructed of pure light and ambient sound. A post-algorithm update to the Light and Space movement, but with proprietary synesthetic technology and a mission to harness the power of art in elevating empathetic consciousness, Chromasonic experiences transcend spectacle and head straight for the universe inside. L.A. Weekly sat down with the team behind Chromasonic to learn more.

The studio’s founders are noted installation and multimedia artist Johannes Girardoni, and internationally acclaimed musicians and sound artists Orpheo McCord and Joel Shearer. Alone and in tandem each of them have pursued paths that converged at the intersection of light and sound made physical, wondering what it would be like to express color and sound as a single expressive act. After four years of figuring it out as a team, they created a real-time, sensory technology called Chromasonic Refrequencing, which translates music into both an abstract soundscape and an organically, algorithmically synced composition of pure color-saturated light — and deploys this magic through the very walls of the architectural spaces that contain it. You are not watching a projection or listening to a soundtrack — you are filled with the light, you are inside the speaker, everything is one thing. Right now, Chromasonic has two projects open in Los Angeles, and one imminent in Telluride, Colorado, deep inside the heart of an actual mountain. It’s a long story. In Venice, adjacent to their studio, Satellite One is a more-or-less permanent installation in the form of an intimate capsule, with a hint of Kubrick energy to its design. About a dozen people enter and are treated to an energy cleanse and chakra tickling mental reset as powerful as any drug, and with just as much mystery, but no hangover. At the Compound in Long Beach — a progressive, healing-oriented arts center — Field Study is installed through June 14 and offers a large-scale, walk-in, more casual come-and-go experience based on the same principles, but with endless room for spontaneous shared experience.

“Satellite One is a personal inward experience,” says Johannes Girardoni. “Sensory Field, which is the ambitious public project we are planning for later this year, will be on a very different scale. What Compound is helping us to do in Field Study is literally to study what happens when we open the core Chromasonic experience to a crowd setting. This applies not only to the logistics of engineering and design, but also to the response of the participants. When we first learned of Compound, we saw that their mission statement kind of reads like our mission statement. It’s really about connecting art in a potent way to help shift consciousness. And that’s at the core of what we’re ultimately trying to do.” Joel Shearer explains, “The expansion of the studio goes back to Telluride, actually. We got asked to speak at the Original Thinkers conference, and at that point we had been singularly focused on creating our idea for a two-story playable sound instrument for 250 people. Well, in Telluride, they had a decommissioned limestone mine just outside of town that they’d been wanting to activate; it’s an eight-minute walk down into this center of the mountain. And so we did it. We did a light and sound immersion suspended in the middle of all that darkness. It was supposed to be for just one weekend during the conference, and we had about 500 people through. And we were so touched by how people were choosing on their own to interact and to experience the installation. People would sit down, lay down, stare up between the walls; they would walk through, and people would watch it from the outside and others would watch it from inside. Strangers were coming together from one end to the other, hugging in the middle. I mean, I’m getting chills thinking about it.” “There were dancing silhouettes through the scrims and people, strangers even, were really experiencing each other through their shadows,” says Orpheo McCord. People were even seen putting their cellphones away — voluntarily. And they experienced the same thing with Field Study at Compound. “As soon as they open the blackout curtains and enter the space, everybody — almost every single person — would go into silence and presence.”

“Everybody chose to do it differently,” says Shearer. “People sat in the middle. There was a cuddle puddle in one of the nodes. There was one guy that was just standing with his hands up to the light. There was another kid that was walking through each of the rooms, interacting with the different people. Some chose to stand still, to sit and go through the journey of it. Folks sat and meditated…”

It was after Telluride that they had understood that there were different ways to iterate their idea, and that’s when they created the in-situ platform, so that the site-responsive armature could be applied in all kinds of locations and at different scales. “Because of that weekend and through a fund of the NEA, Fluid State is now going to be a permanent installation in Telluride,” says Shearer. “So, we took all of that back to Venice, back to our brainstorming, and created the in-situ platform with the intention of increased accessibility to the work.” “So you can imagine, Field Study is four ‘nodes,’ like chambers, around a central courtyard kind of space, and we’re learning so much about scale and programming for Sensory Field, which is going to be up to 40 nodes in a grid, over let’s say 8 to 10,000 square feet. As each node is its own autonomous sound and light source, we’re really thinking of it as a very spatial experience. And as Johannes is saying, it’s very material in the sense that we’re elasticizing the architectural space, treating it as a medium and material in itself. And as you’re moving through the sound and light, you’re going to feel that spatially in the body. It’s not going to just be a visual experience. You’re going to feel it,” says McCord.

This is just the kind of thing many of the Light and Space artists were after in their works — from the meditative yet communal spaces of James Turrell to the more psychedelic light-flooded chambers of Carlos Cruz-Diez, but as Girardoni explains, there are crucial differences as well. “As it relates to Light and Space and all the important work that that generation did and is still doing, you know, we’re in a very different cultural context now. We are living in a culture that is permeated by technology, and everything around us is sensing us as well. Right? Our phones are sensing us right now, all the time. And so that’s having cognitive impacts on everyone, individually and collectively. Our work is really premised on the realization that we are not the only sensate beings anymore. Where the Light and Space movement is really kind of about activating your own reality, the new reality is that we are not the only ones. And we as artists need to confront this idea of what it means when an external system perceives us? This feedback loop is the new cultural reality for humanity,” says Girardoni. “We all have such a pure relationship to the power of light, color and sound,” says McCord. “When you remove all of these structures of narrative and expectation, and you put people in these environments where they get to simply have that rich experience of color, that allows for a real state of presence to come through.”

Even the music is abstracted to avoid unpredictable, finite associations to distract from the purity of sensory fusion. “When we’re creating the sound source for any of our platforms, we’re using analog instrumentation, the initial source of sound would be a piano or a marimba or a guitar or even a voice. We manipulate that sound in an organic way to get it to a point where you, the participant, can’t identify it as a piano or a guitar, because, again, that will trigger a whole narrative association story. That’s what the brain does. And that’s how we navigate the world. But to create these environments where we get to move out of those spaces and experience our presence, our pure presence and consciousness. It is beautiful. And if we can harness technology to do that then, so much the better. Fight fire with fire, as they say,” says McCord. “If you can create an environment where people can just settle back into themselves, and do that together, profound shifts happen,” says McCord. “People will walk away from that environment feeling that shift. In environments where you remove any kind of story, where you get to just exist in a heightened present state and allow the somatic intelligence to come through, in community, I personally feel that is the purest way to move through all these blockages of pain and anguish that we as humans experience.” This feels especially urgent and true in light of the last two years and now the last two months of global trauma, isolation, and the broader decay of empathy. Maybe a space where we can just simply exist together on a field of light and sound, for just a little while, is exactly what we need. And this is what the team means when they speak about the healing power of art.

“Amplifying the ability to create presence in ourselves,” says Girardoni. “I think without that, we’re lost. We will be lost. The future is lost. So this work is really founded on being a change agent and disruptor to the technological systems that have evolved today. We want to use the potency of art to be in service of that.”

Head to chromasonic.com for more information and tickets to visit their current installations. Follow the team on IG @Chromasonic for the latest news on upcoming projects. 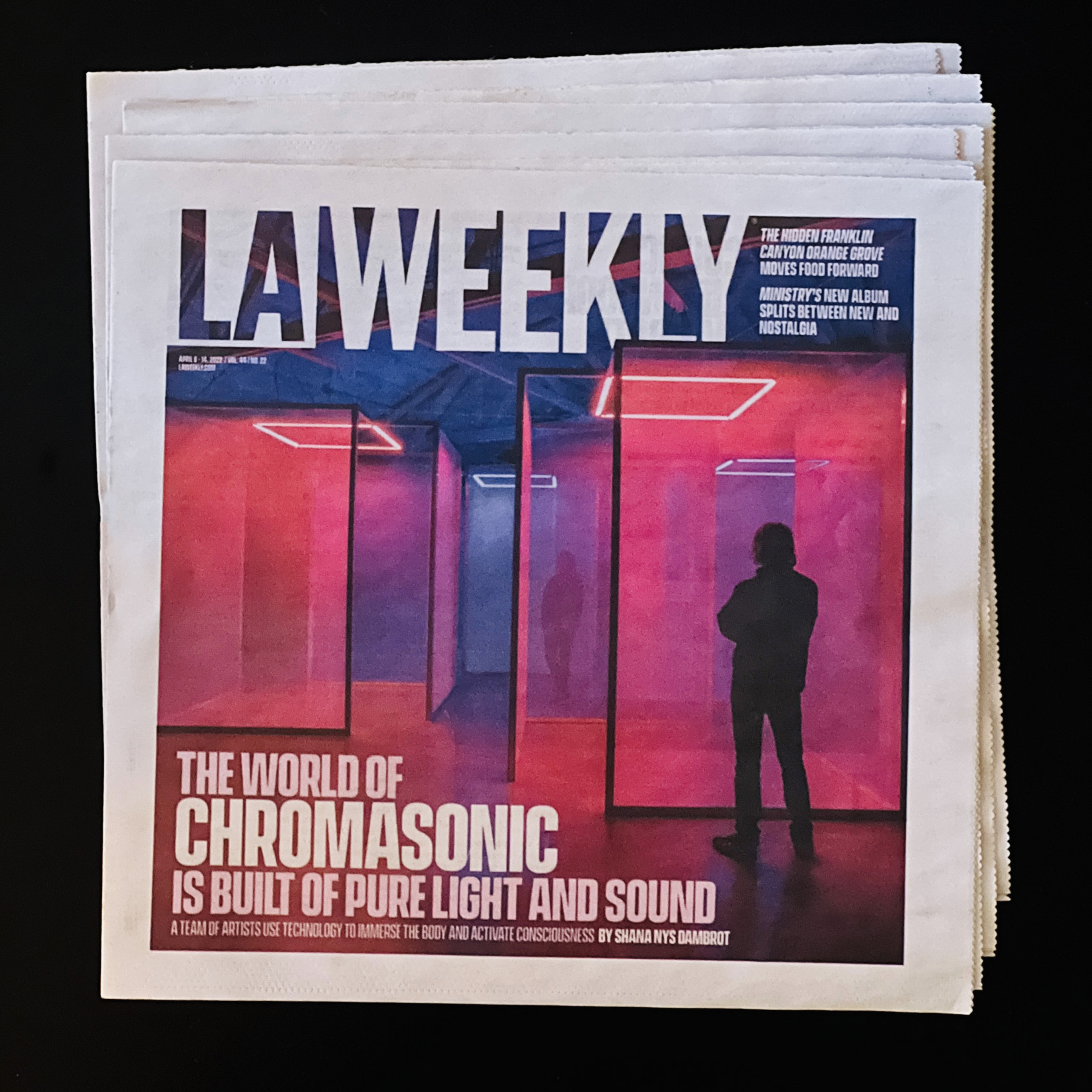