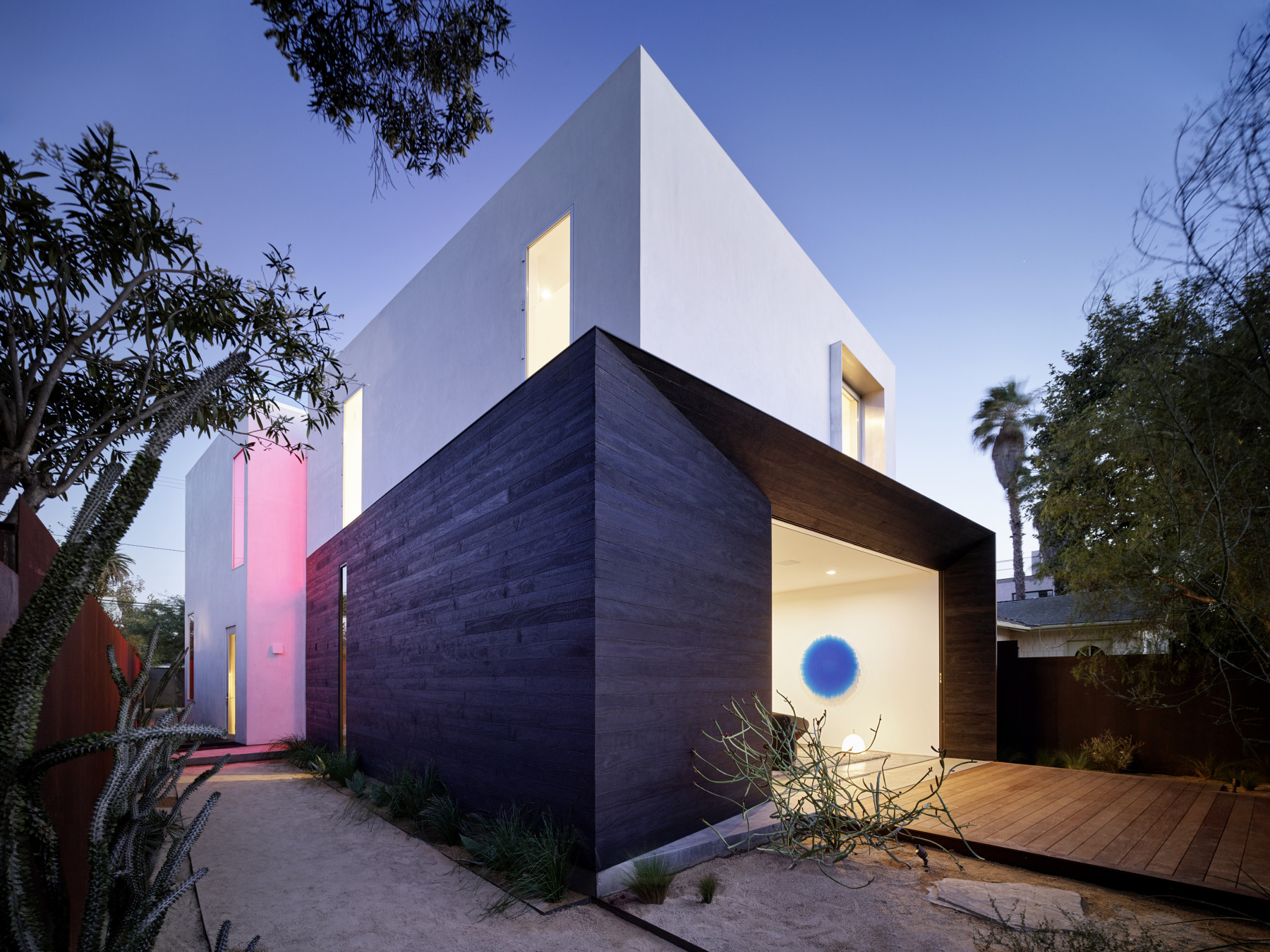 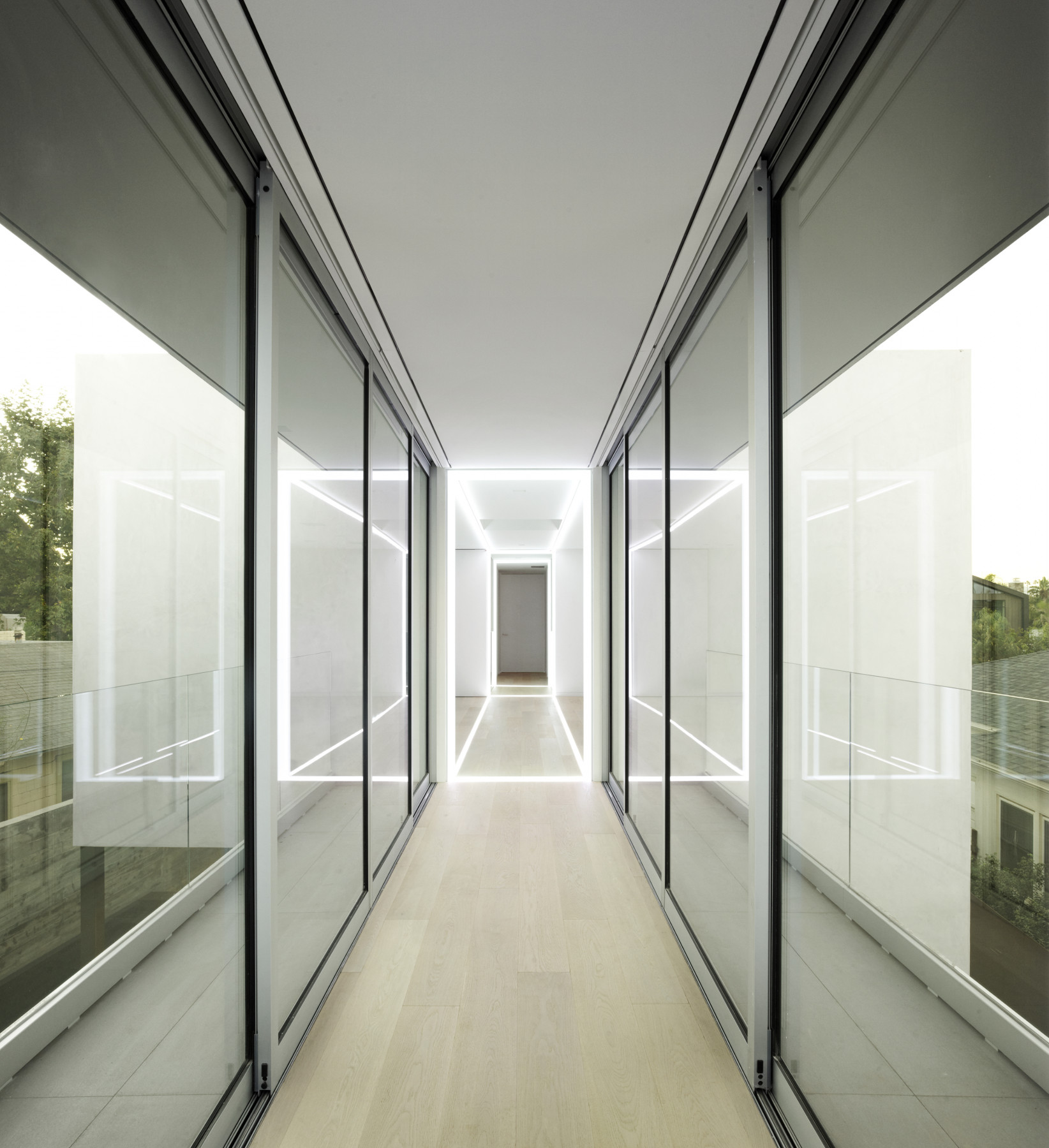 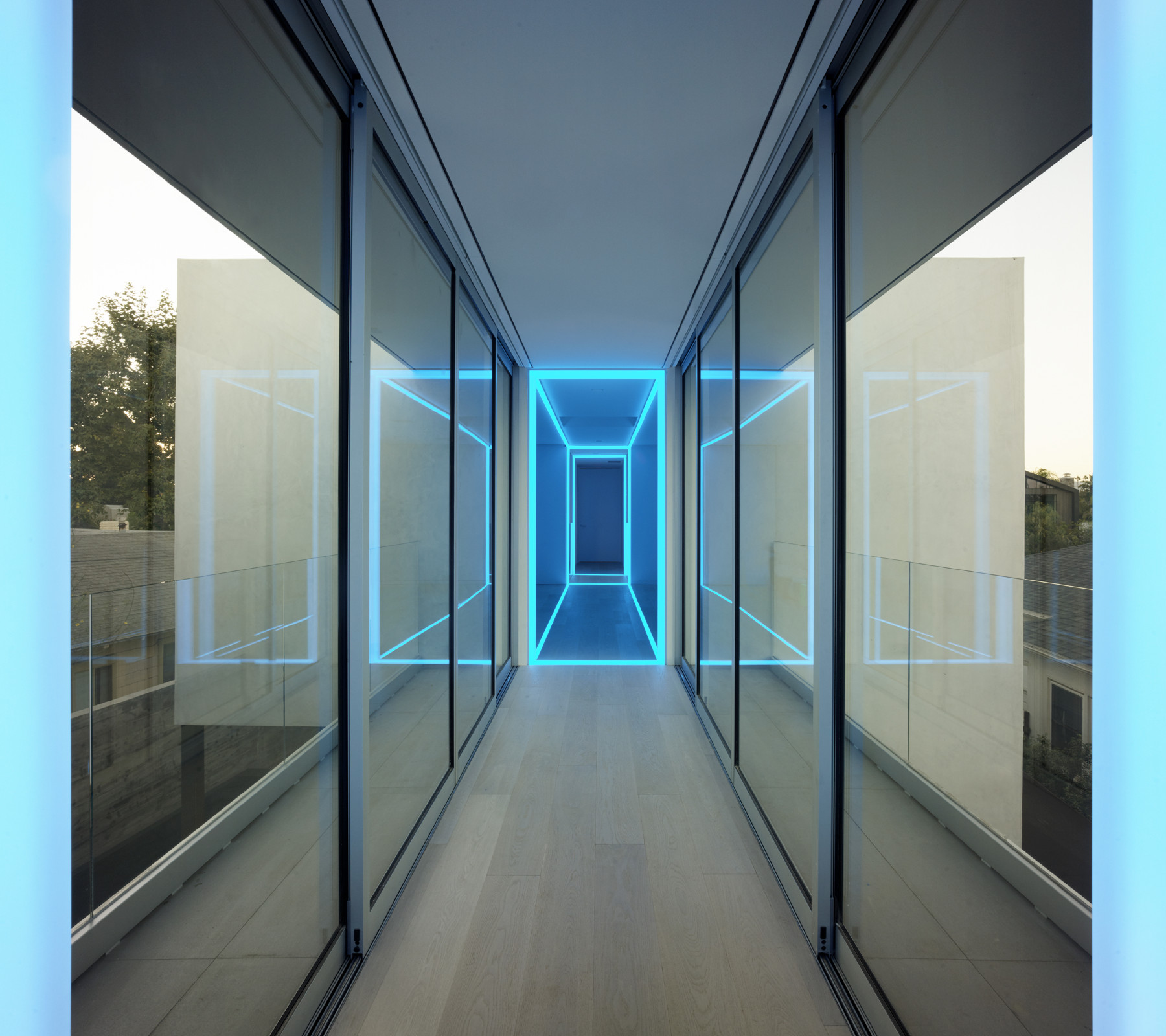 At dawn, Spectral Bridge begins its daily sequence. The sculpture moves into a slowly evolving light program that starts an hour before sunrise. Natural light from the environment mixes with Spectral Bridge’s slowly evolving light sequence, continually rendering the experience of the space, the architecture, and the site in an organically new way. Motion data captured by the artwork’s sensors in the bridge additionally affect its behavior, creating another way viewers experience the site. In this way, the sculpture never appears the same, and the architecture shifts with data collected by the artwork’s sensors. 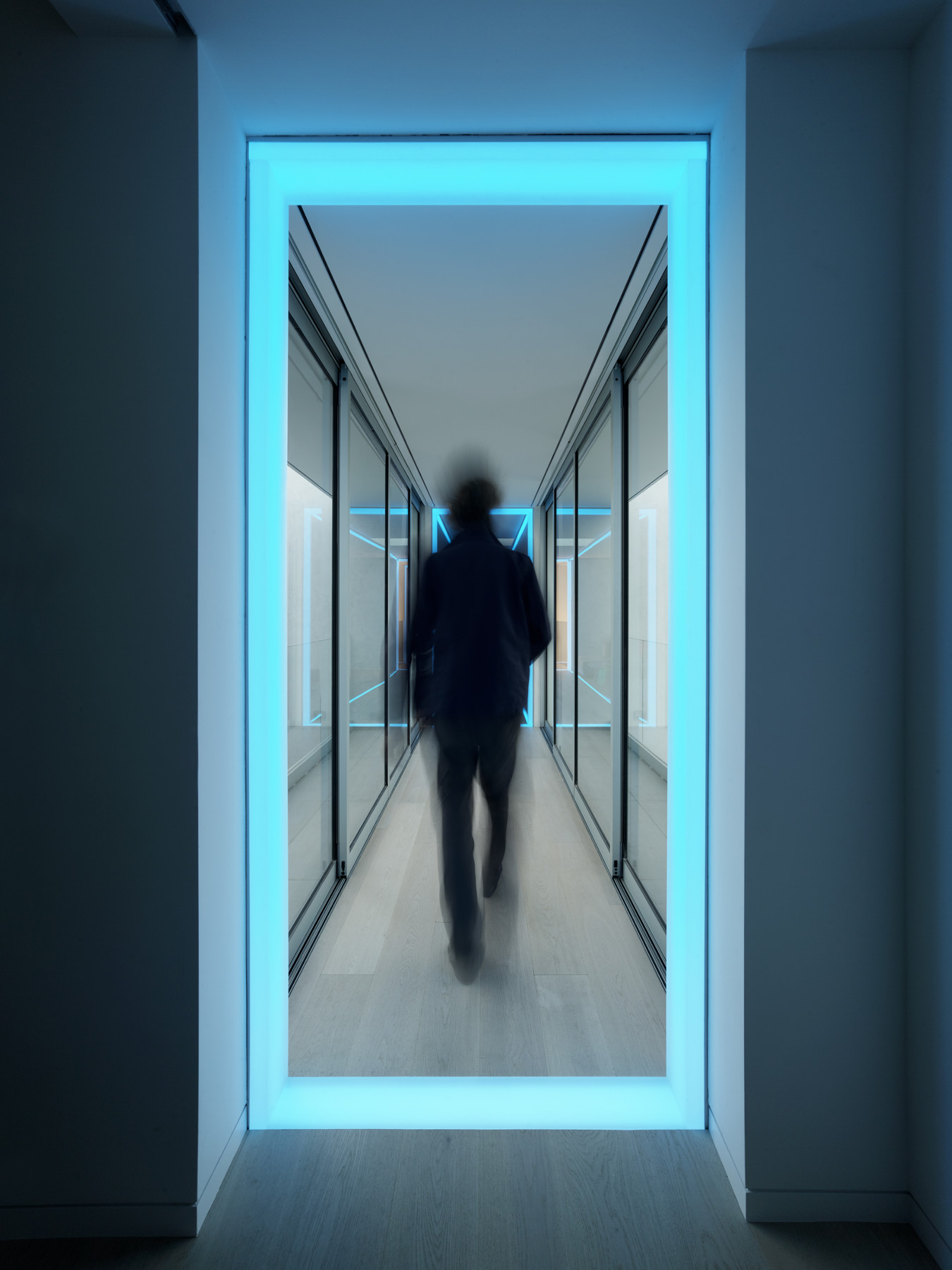 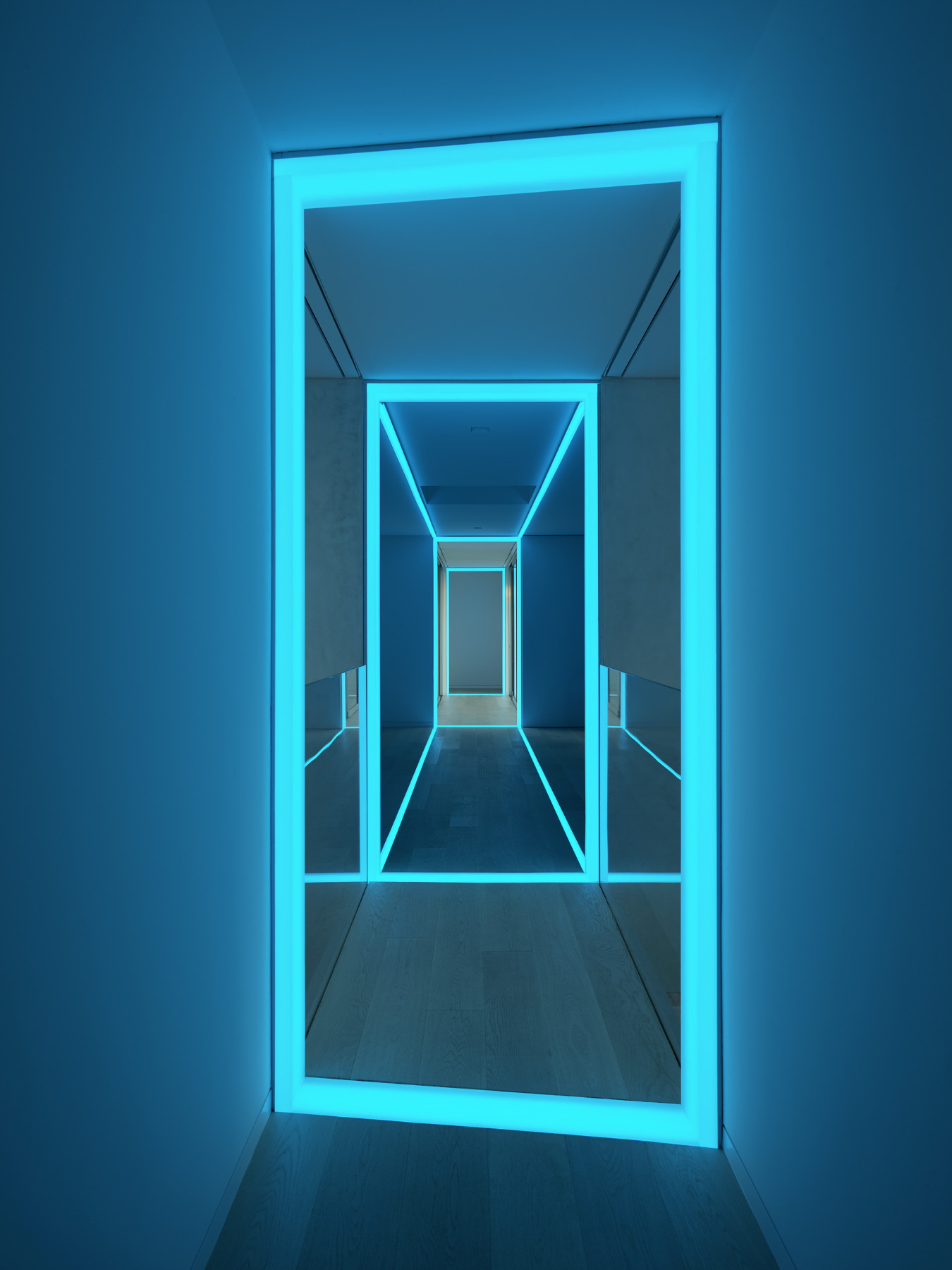 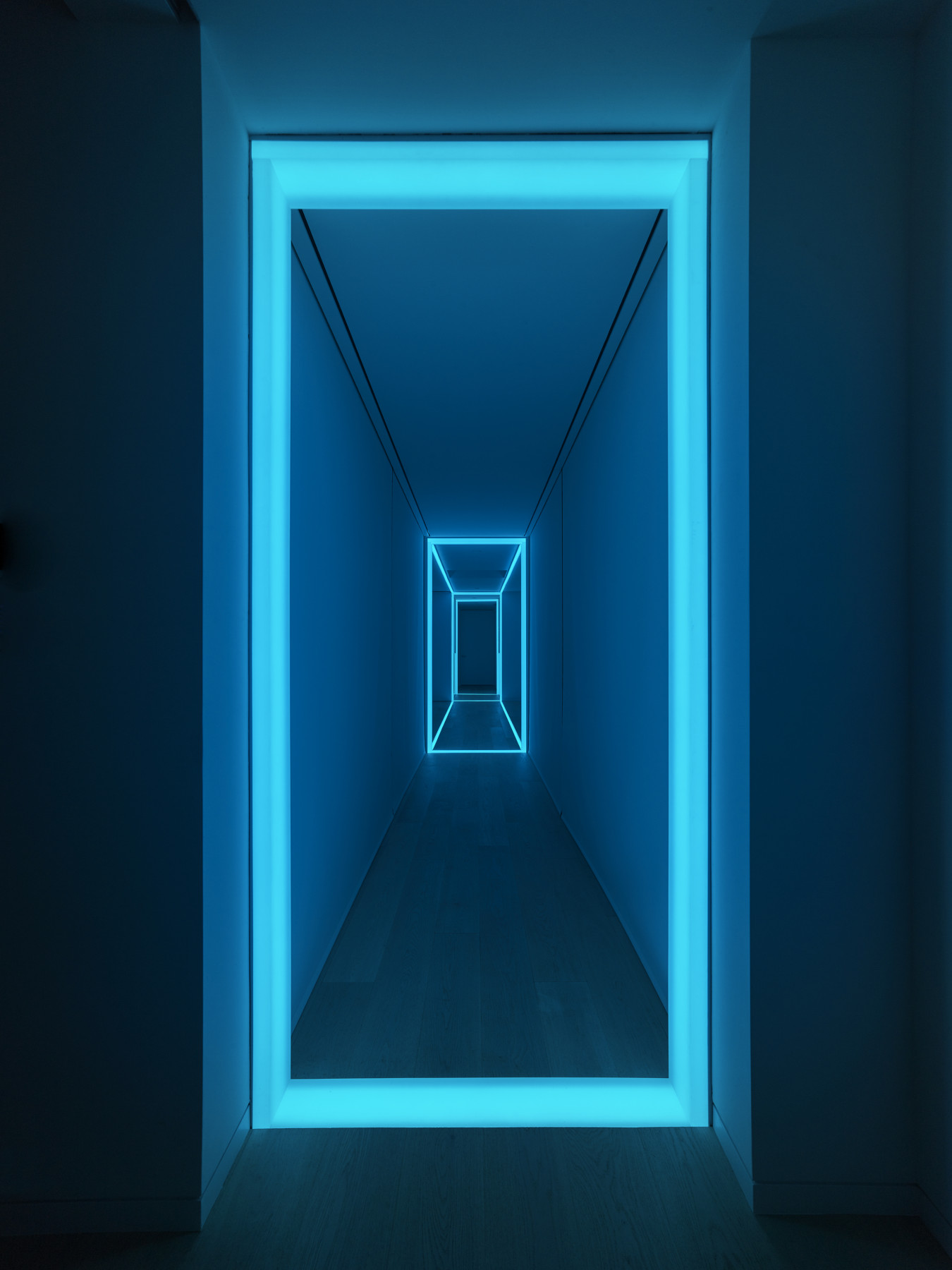 At night, visitors experience Spectral Bridge as an ethereal and fully immersive environment composed of light. 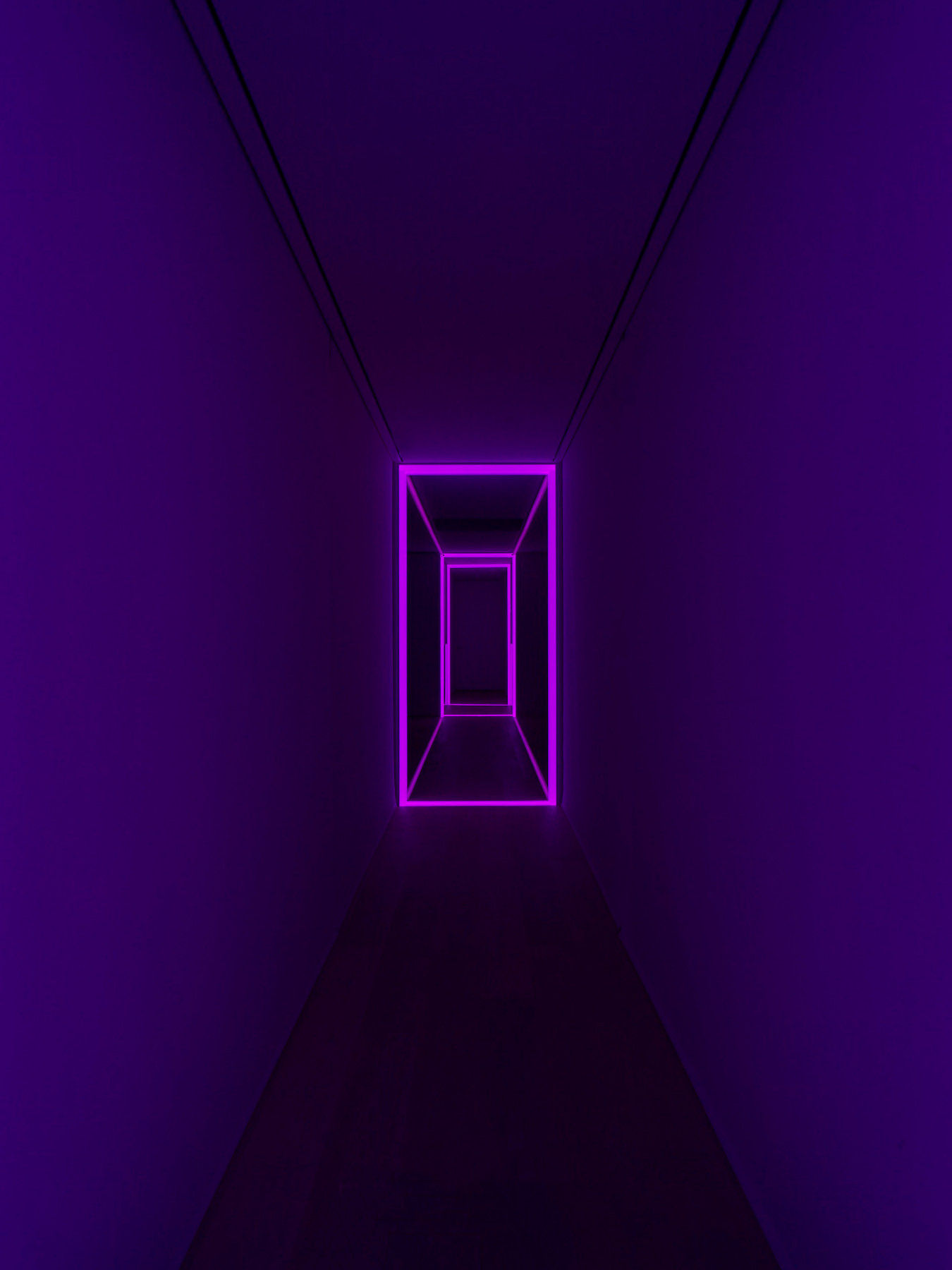 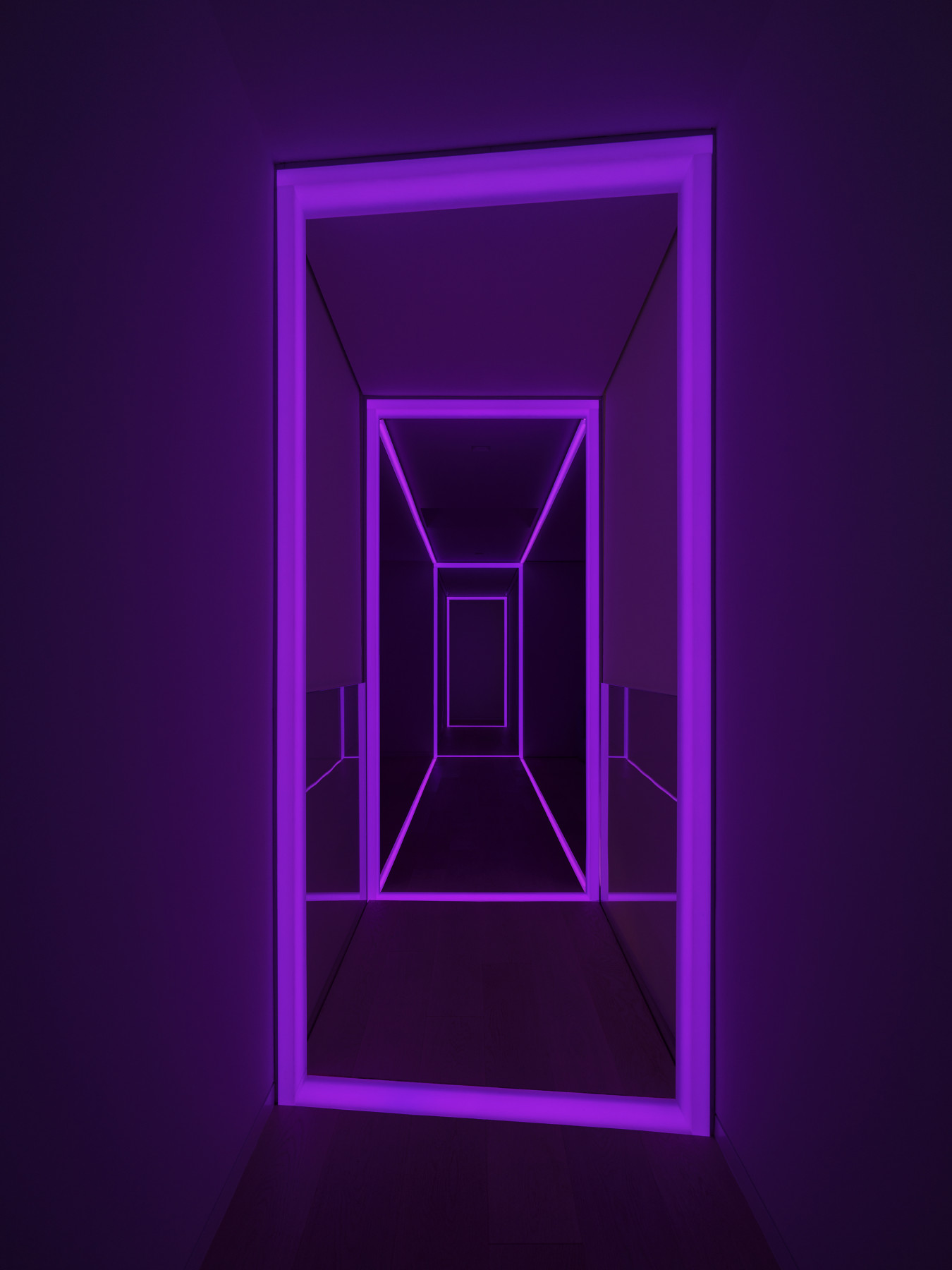 Spectral Bridge is an immersive light installation. The experiential sculpture connects three separate structures and reads as a single physical volume expressed through light. From the inside, Spectral Bridge is experienced as an aperture that shifts between engaging and disengaging the interior from the exterior each day. 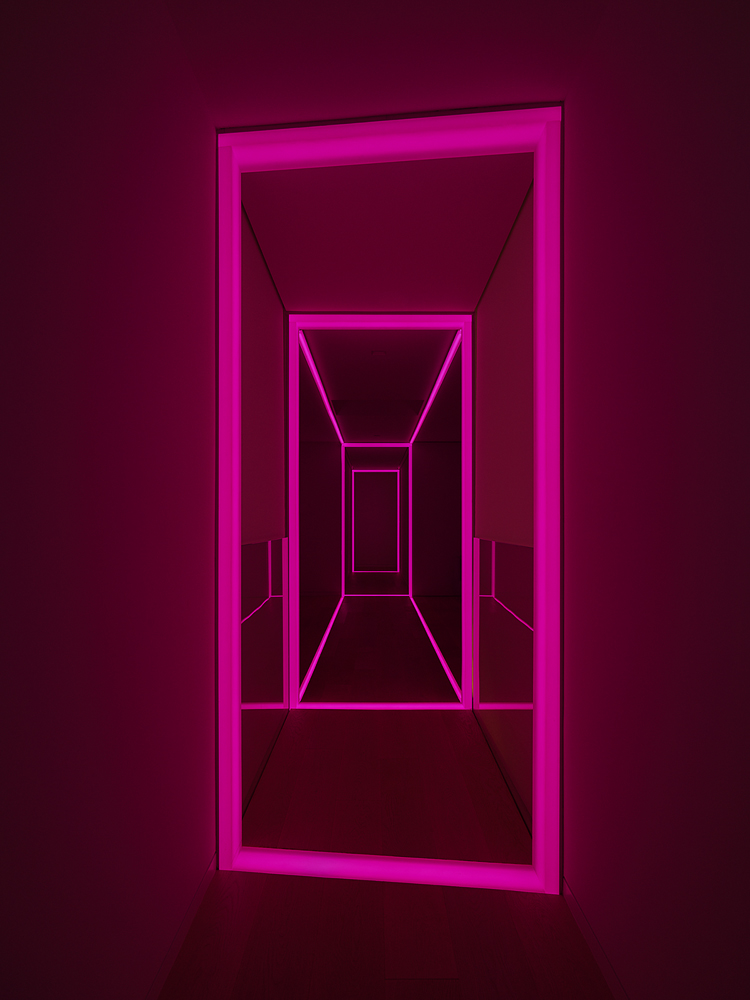 Spectral Bridge is an immersive light and sound installation that forms the spine of Spectral Bridge House. Cast resin elements fully frame the entry points to each structure and illuminate the entire installation. In the central space, the entry and exit points are connected by lines of light in the ceiling and floor, drawing a visual connection of the two adjacent bridges into the physical space of the Spectral Bridge Lounge. The installation runs on a program timed to sunrise and sunset, shifting through a single color sequence each day, based on a year-long evolution of the spectrum. During daytime, light emanating from the installation is contained by the resin elements framing the four doorways. As day gives way to night, the elements release light and fill the entire space with an ambient glow. 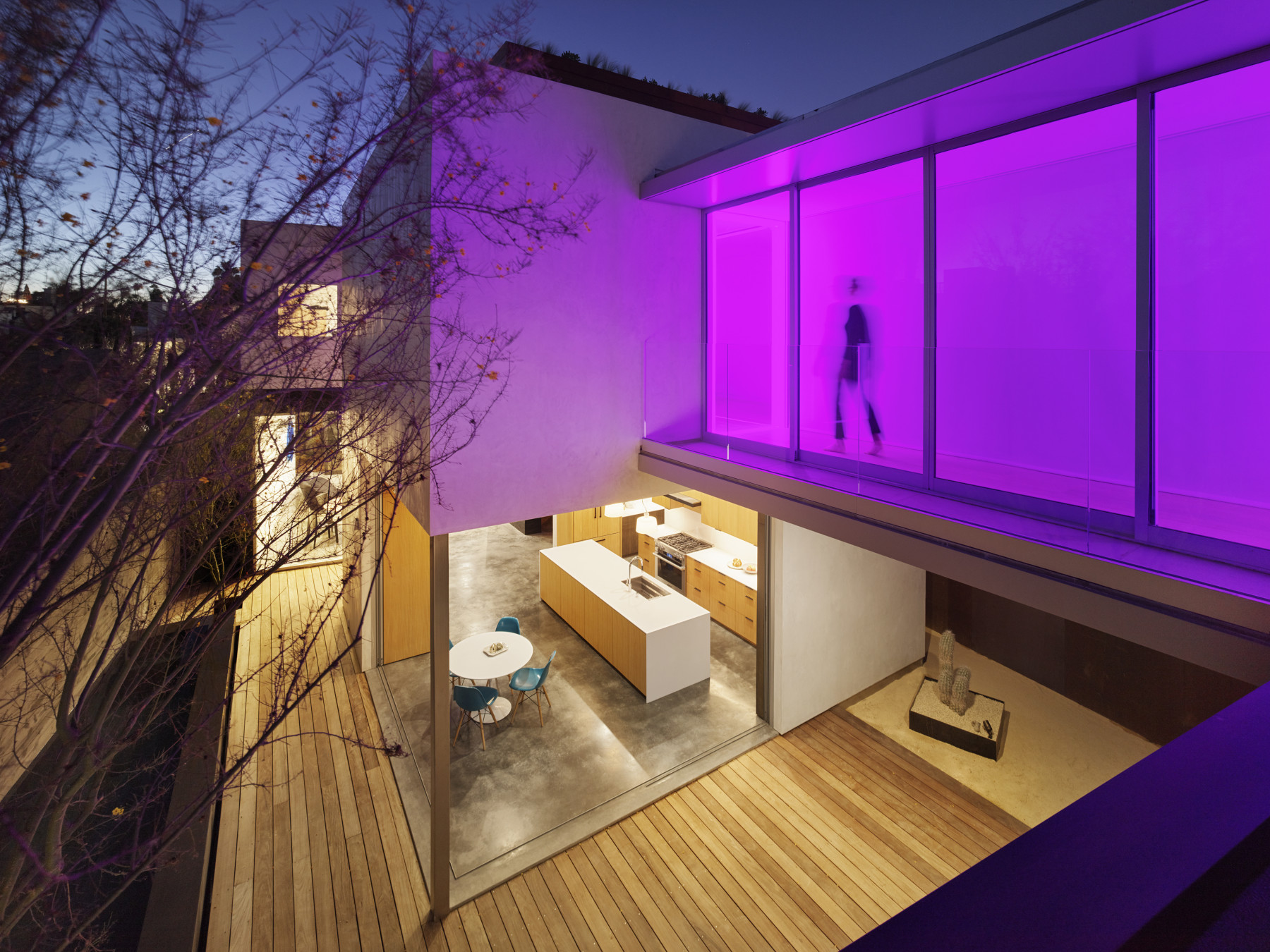 A collaboration between artist Johannes Girardoni and architects Takashi Yanai and Steven Ehrlich, partners of EYRC, Spectral Bridge House embodies the concept of “art before architecture,” a philosophy advocated by Girardoni in his projects that engage the built environment. Girardoni creates site-specific projects that explore connections between art, design, technology, and architecture to pursue experiential states of radical presence.

For this site, a narrow lot in an eclectic urban neighborhood about a mile from the beach, Girardoni and Yanai worked together to create a spatial design for a home that would also be an immersive art experience. Girardoni and Yanai collaborated to integrate art and architecture by creating three two-story living blocks. Their monolithic shapes are disrupted by irregular angles emanating from the seven-degree rotated axes of the central structure and are scaled in response to surrounding houses. Lined up in a row, the separated volumes create in-between spaces that become the location and platform for Girardoni’s art.

Spectral Bridge is a supra-sensory light and sound installation that connects the three structures, linking the first two buildings by an interior bridge within a glass atrium and the rear two structures by an exterior glass bridge. Spectral Bridge runs on a program timed to the sunrise and sunset, slowly shifting through color sequences based on a year-long evolution of the spectrum. Visitors experience it from the inside as a series of spaces defined by lines of light, volumes of color, and ambient sound. Viewed from the outside, the bridge reads as a glowing physical volume – a light sculpture that materialized as architecture.

Interior spaces include the Spectral Bridge lounge, from which the artwork’s entirety can be experienced. The colored light and sound immersion acts as a sensory veil that either reveals the site’s exterior in a blend of natural and artificial light or completely disengages from it, creating an inward-focused atmosphere that triggers states of radical presence in participants. These sensory states are induced by fundamental connections between light and sound frequencies. In addition, the specially formulated calcium-based exterior captures the subtle interplay of light from both nature and Spectral Bridge, further expanding the expression of the art as it emanates out into space.

The studio’s work in the built environment explores a hybridization of art and architecture to amplify the experience of self and site. In collaborations with architects, Girardoni’s method advocates for site-specific art to underpin the architectural design process. His approach leans on the idea of “art before architecture.” Girardoni focuses on formulating a conceptual art program in which the art magnifies the sensory activation of the site and of architecture. Compressing art and the built environment creates opportunities to blend the physical and the ephemeral which amplifies visitors’, residents’, and participants’ experience of place.

Girardoni’s art-architecture collaborations have ranged from master planning site-specific art programs in large projects to in-situ installations in residential work. He has worked with world-renowned architects such as Tom Kundig, EYRC, Rick Joy, and Kulapat Yantrasast/wHY, amongst others. 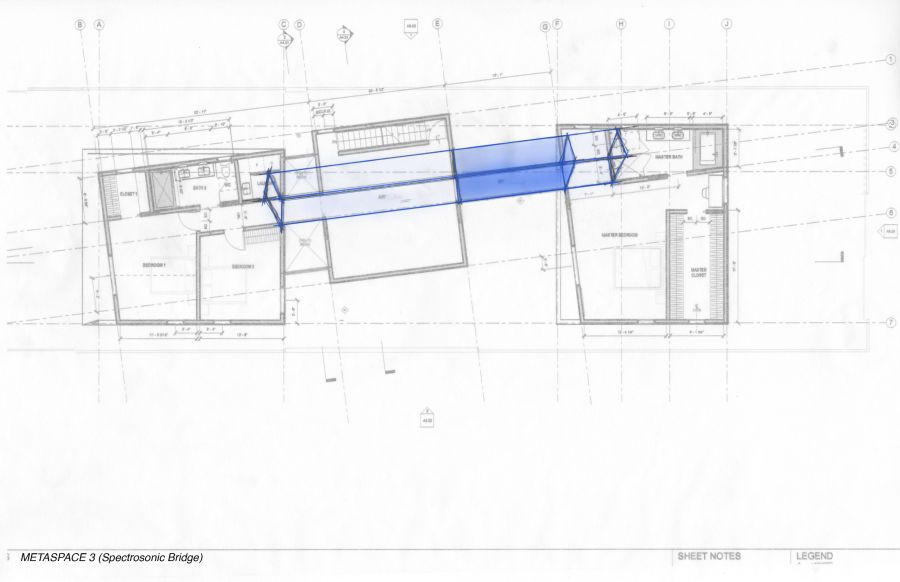 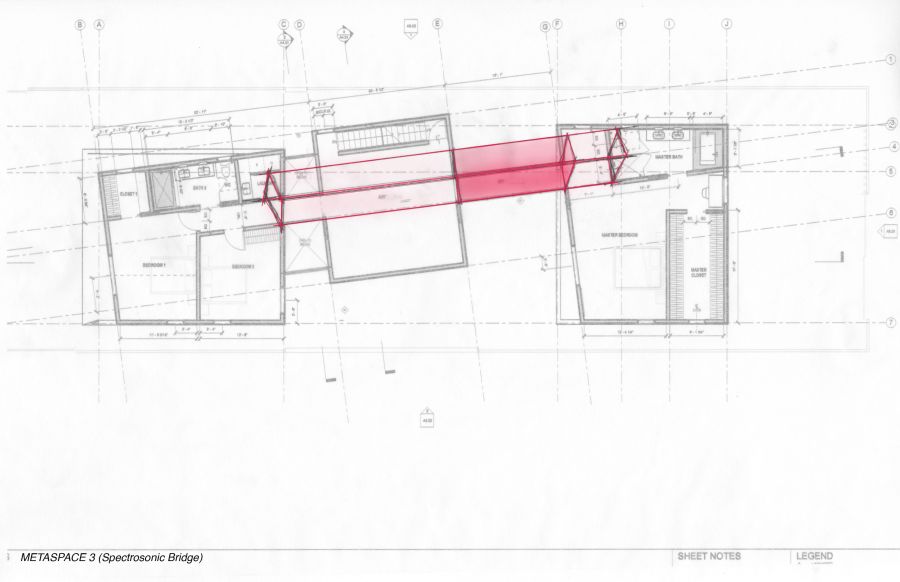 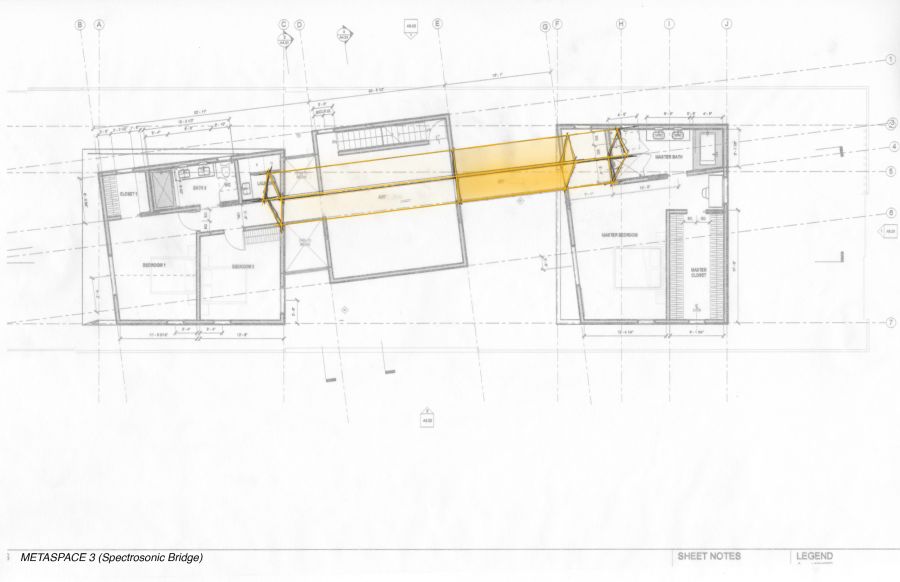 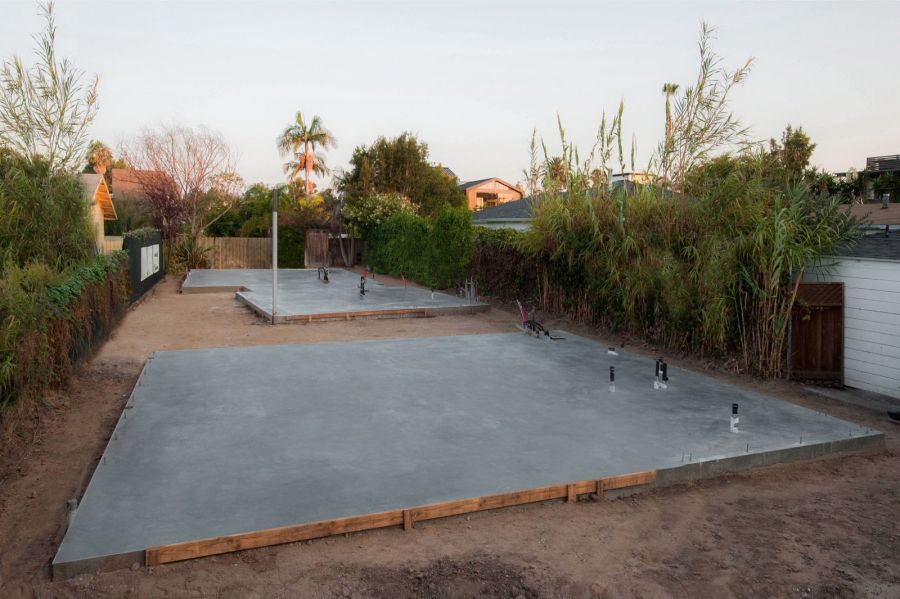 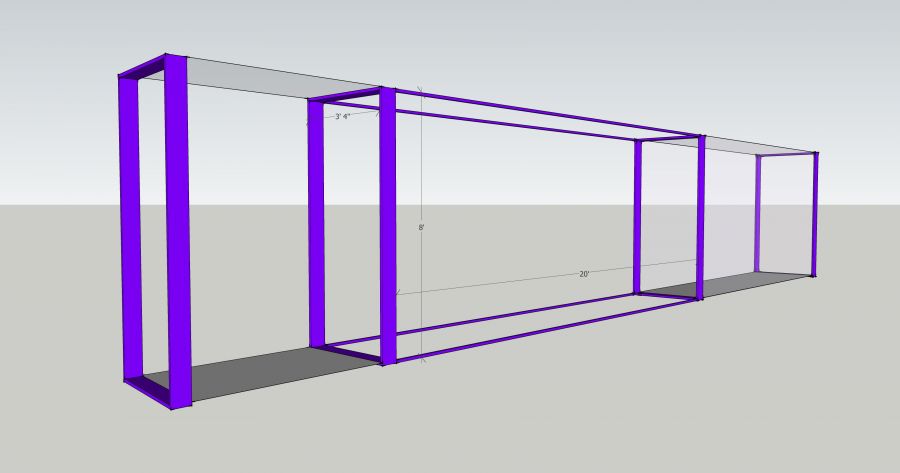 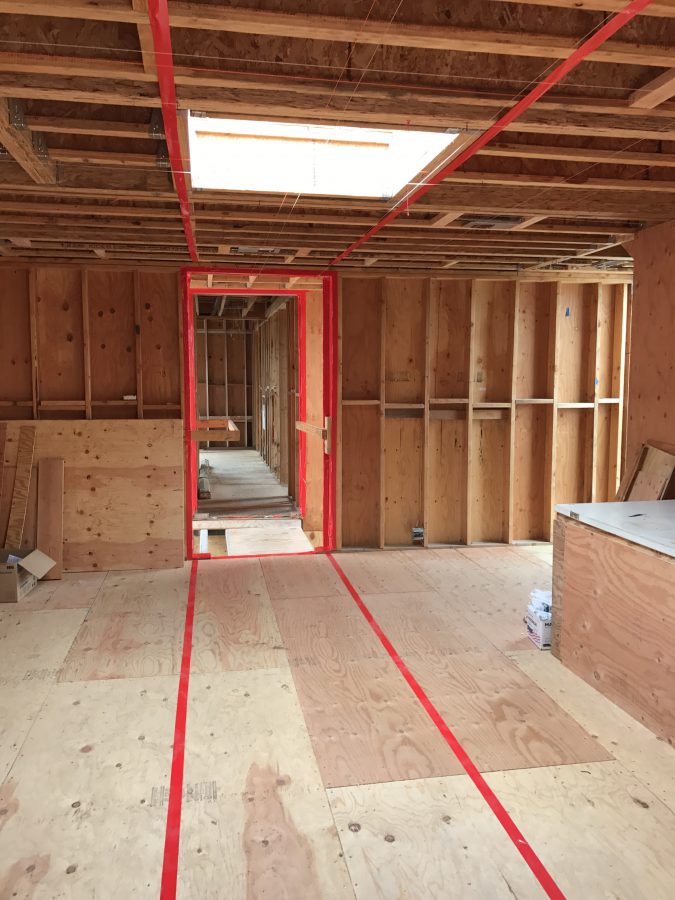 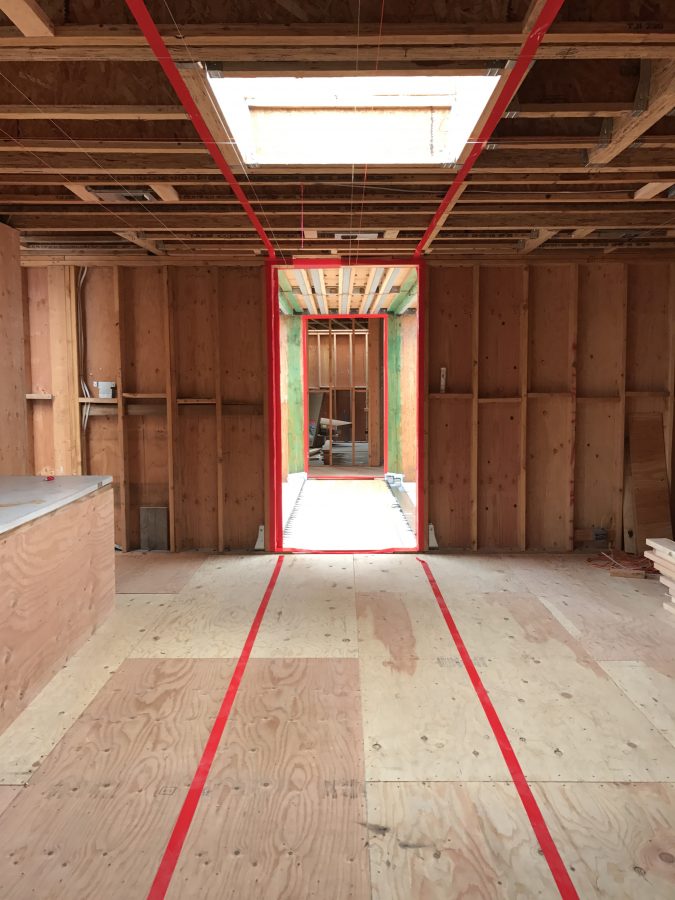