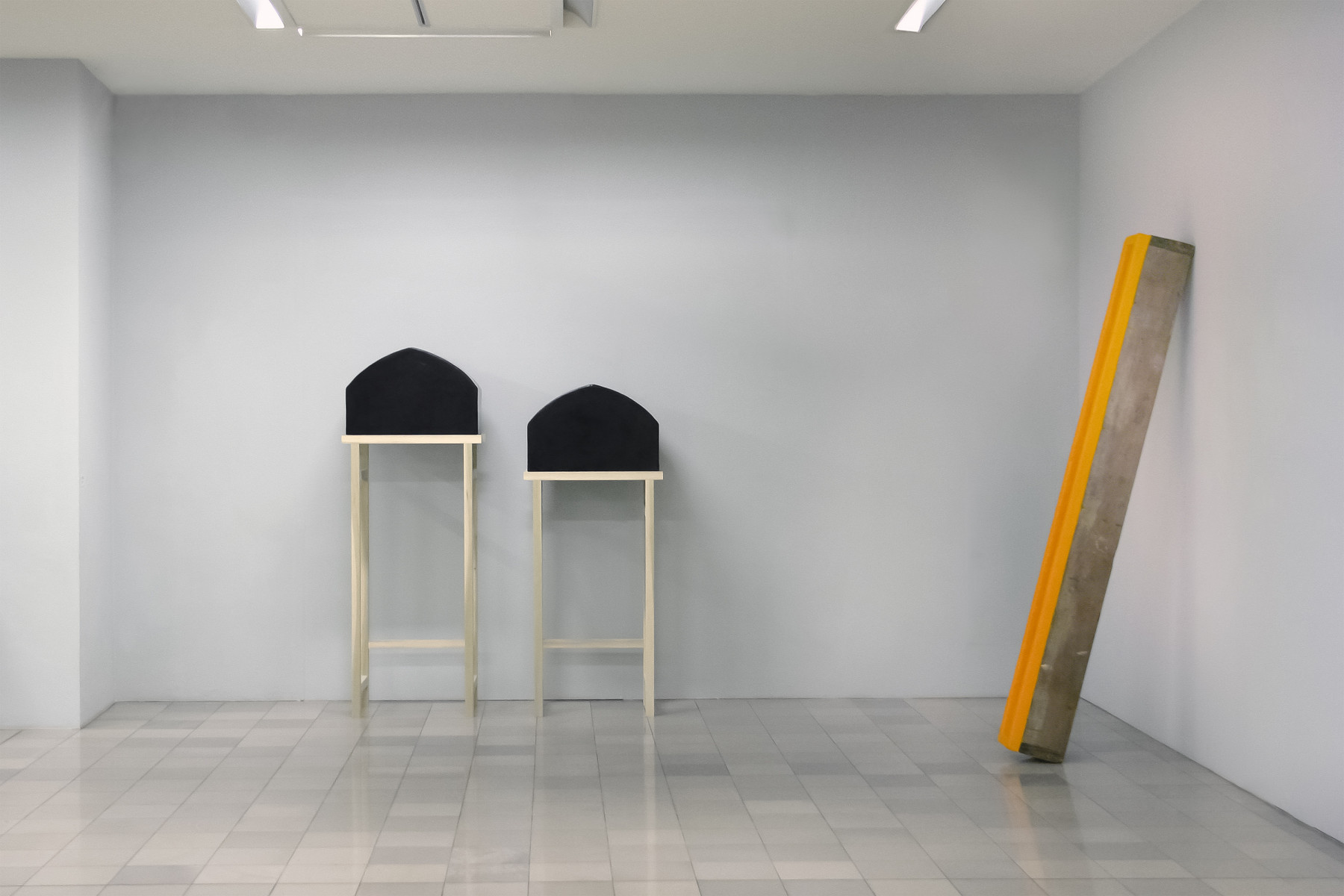 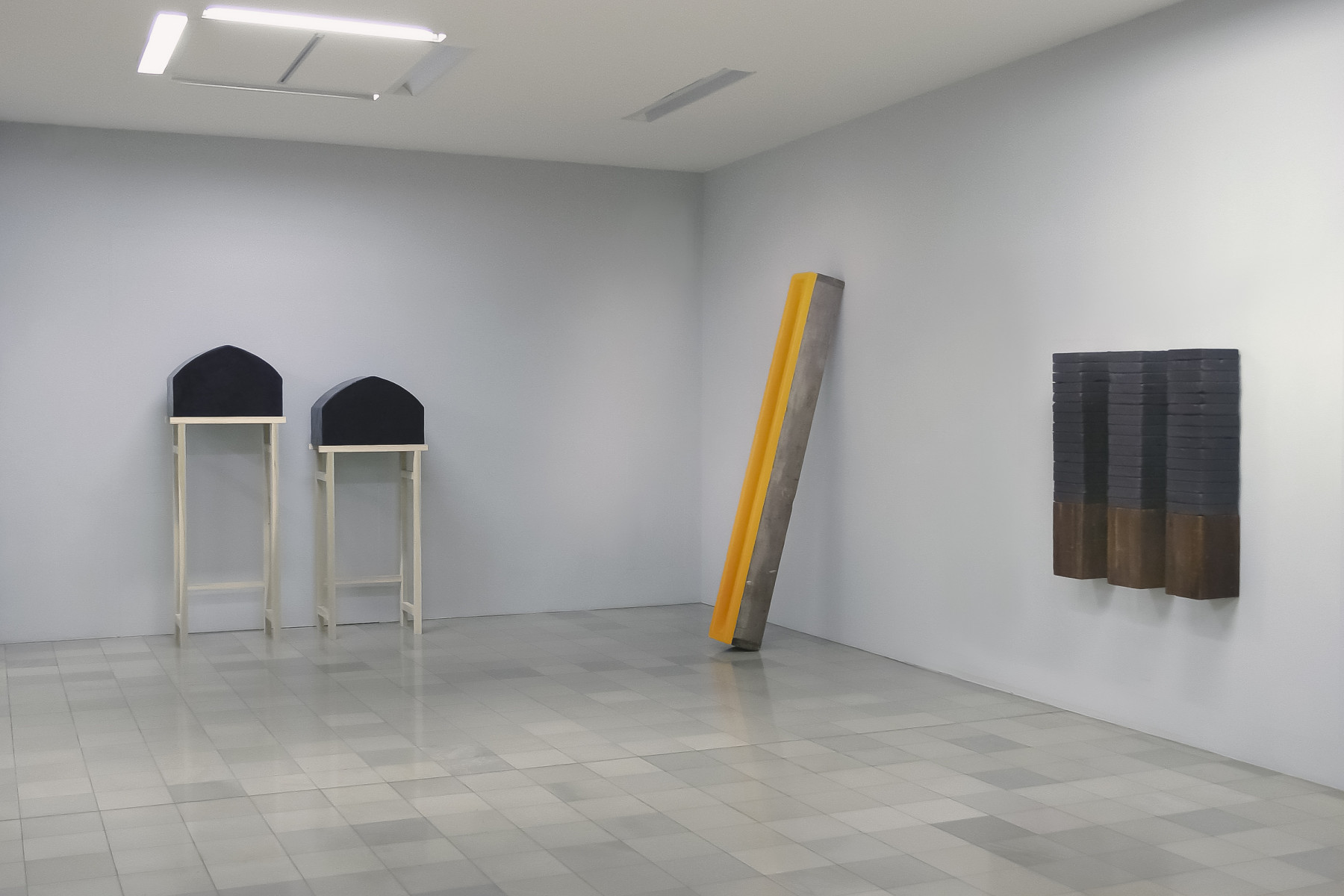 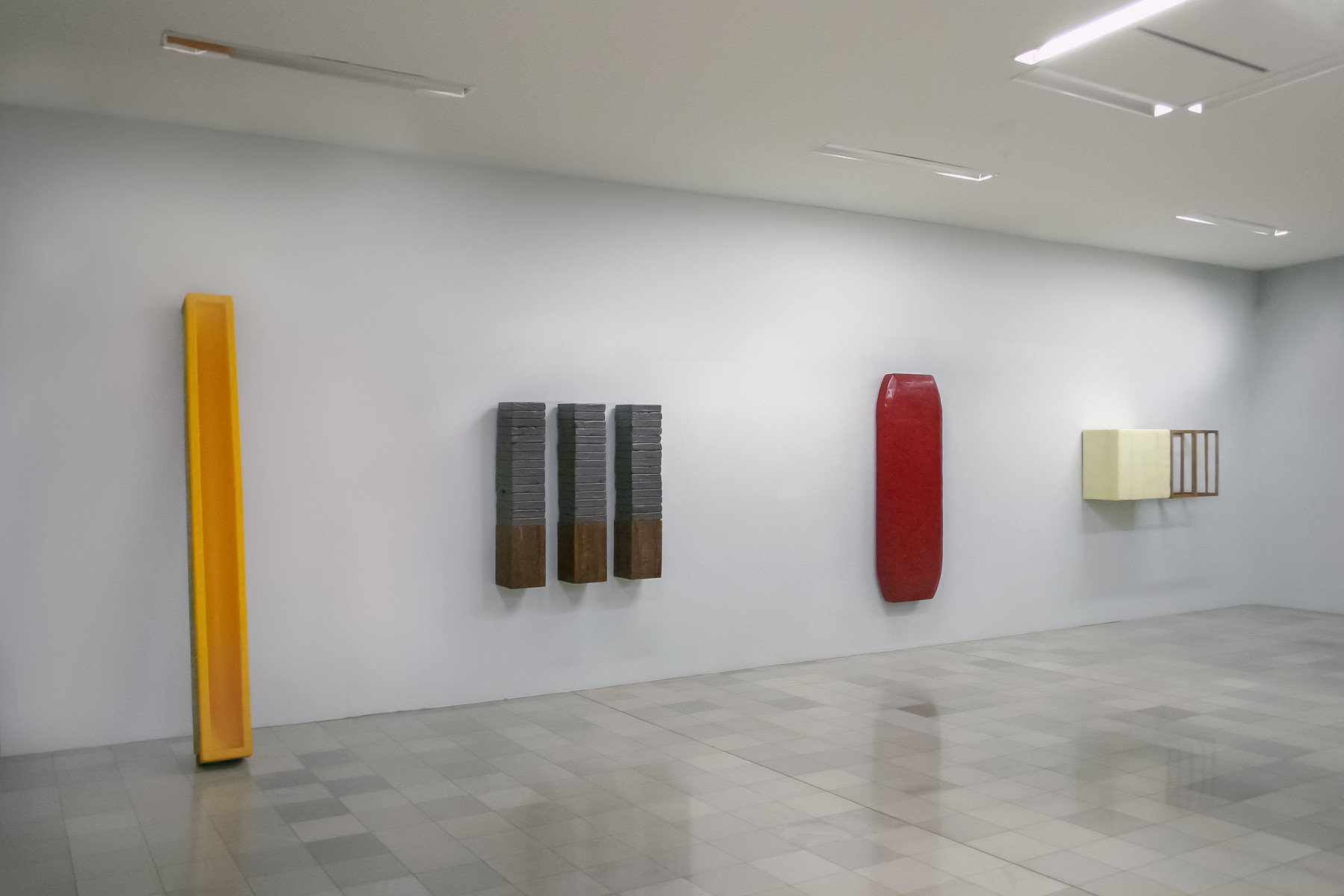 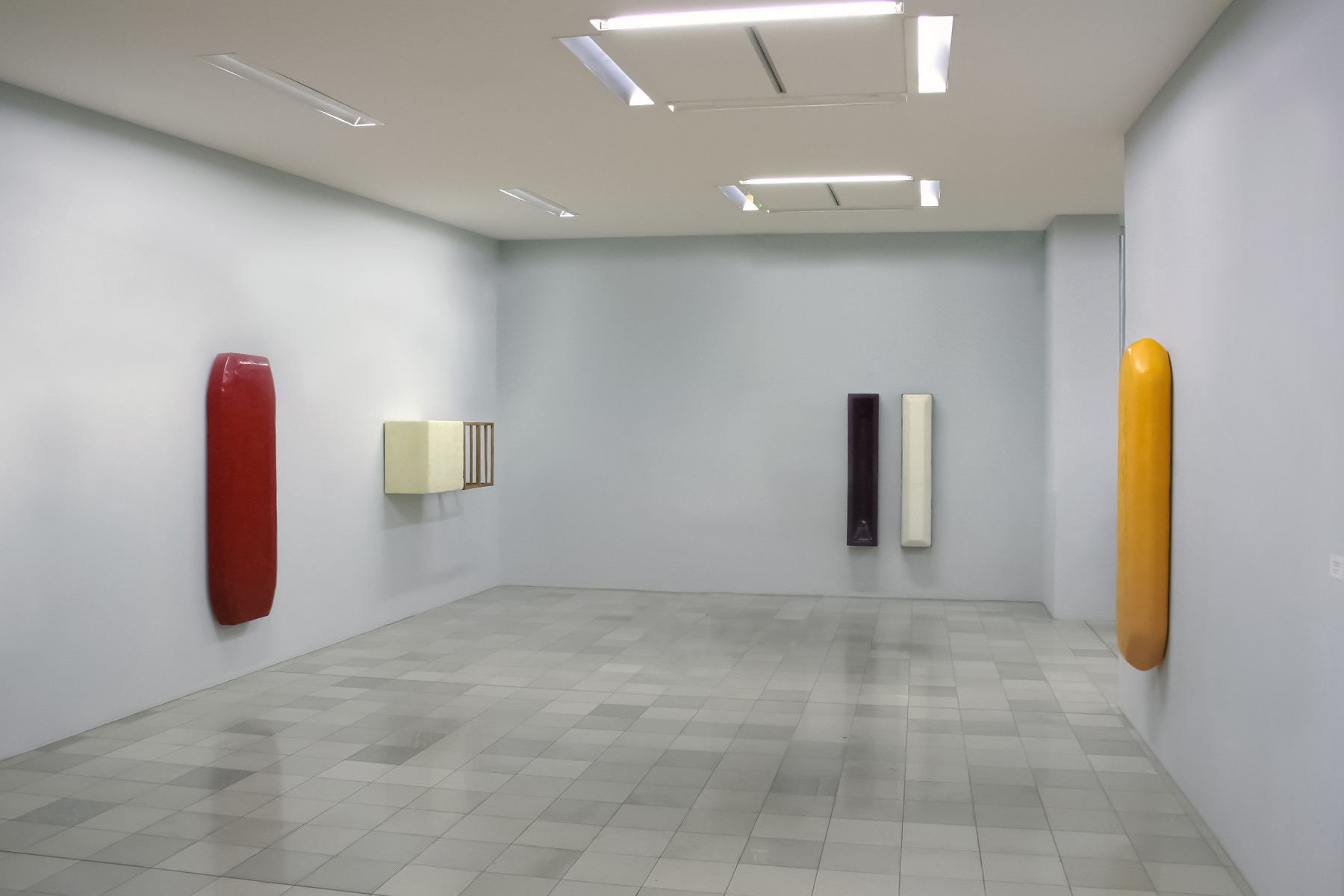 Personal Structures at the Ludwig Museum, 2005

Assuming that Personal Structures is in the broadest sense a tribute to the formal but also intellectual emulation of “minimal art,” as well as a reflection upon and a new creation of it, the question inevitably arises concerning what is novel, and what is different about the art presented here. Each of the sixteen artists from eleven nations introduced in this project undeniably seeks an individual approach, a different texture of the surface structures, a differentiated grasp of material qualities, which often appear to be overcome, perhaps on a visual level almost “canceled out” and virtually play with the antipodes of expectation (what is heavy becomes light, what is dense becomes immaterial, what is soft appears rough, etc.).

Assuring oneself of the concept of Personal Structures means becoming aware of the references without suppressing the sensual and aesthetic enjoyment of the works. The reduction alone to only a few elements, forms, and materials, to an at once unpretentious as well as auratic presentation of the works in the room requires a complete, unconditional willingness to deal with the picture or object qualities. By dispensing with any references (to contexts external to the picture entity or iconography), the radicalism of “minimal art” already called for a totality of perception: it was – as Max Imdahl noted earlier in reference to looking at a non-objective painting by Mondrian – a “direct confrontation with the thing itself.” Max Imdahl ever concerned with precisely pinpointing with language what is per se indescribable, invisible, and intelligible hit it even more succinctly by emphasizing that “when looking at a non-objective picture, the experience of evidence [is] a given”? The phrases “direct confrontation” and “the experience of evidence” themselves make clear in simple verbal terms the extent as to how strongly the work speaks from itself and for itself. Its center is in itself.

Certainly one may not lose sight of the fact that the mere thing per se, the factual reality of the work itself, as yet hardly says anything concerning its aesthetic quality and its sensual attractiveness. The person who, in a picture such as Barnett Newman’s work “Who’s afraid of Red, Yellow and Blue”, would concern himself only with color and not consider its dimensions on the canvas and the “exposure” of the viewer in relation to the oversized proportions of the painted space, and who would not address the feeling of being at the mercy of the color, as if being engulfed or at least surrounded by it, that person does not comprehend the essential conceptual deliberations of the artist himself. What has been seen translates in the viewing process immediately into words, into language, into concepts, which in the best-case act as a simultaneous translation. But often language has difficulties in finding the right words for things the intellect and feelings have already firmly grasped. Personal Structures has been precisely conceived with this in mind, because it is not just the works that speak for themselves: Even when merely thumbing through the interview comments the artists make in the catalogue, it often strikes us how much the artwork serves as a gesture of expression in order to derive and newly create a larger, broadly comprehensive relationship between the individual and the world. The titles of the interviews already provide examples of how decisive this impetus is for many artists. Thus, Johannes Girardoni states: “Everything must evolve out of necessity,” Jus Juchtmans summarizes: “The way things grow in nature, that’s how my paintings grow”; Tomoji Ogawa from Japan ultimately maintains: “What you can’t see is more essential than what you can see,” and Rene Rietmeyer reaches the conclusion: “Ultimately, my work is nothing other than the proof of my existence”. Simply taking this short selection of remarks concerning the character of one’s own work can make clear that nearly every artist is dealing with the ontological side of art and being. Art does not want to just “be there,” but rather art has a goal which it seeks to express together with its “creator,” sometimes groping, other times entirely self-assured. If one wishes to find a common denominator for this loose group of artists, then it is the work and at the same time the self-made statement about it that together form the components of an artistic will to expression. Language becomes the medium of an art, which from its own vantage point should be self-sufficient and (seen from the viewpoint of “minimal art”) has largely been exactly that up to now.

This does not make the works of art per se any less capable of making a statement, but rather enables them to claim from the onset their own language space, which they both take up and absorb in the same way as they already do anyhow with their material. Artifact and language thus melt even more together as one, at the same time leaving less space for clear horizons and free concepts which might tend towards the diffuse. It is precisely in a mutual reference of artifact and self-reflection that a field of tension for art opens to the viewer, which conjures up the strength of the universal. Because this art is not self-sufficient and constantly tries to fathom new contexts, the form becomes a picture of meaningful ontological references that supports the individual to the utmost.

Personal Structures views itself as an open dialogue of the individual artists with their work and their recipients, but also as a dialogue among each other, whereby it is not certain whether the group will remain in the same constellation as it is right now. In the (ex-)change of artists and exhibition pieces and thus, of course, also in the exchange of new reflective meaningful references, the concept of “Personal Structures” makes clear a newly launched open dialogue about abstract, sometimes minimalist/conceptual art. It perceives itself as a work in progress, namely with all of the consequences of a – sometimes – radical dialogue. In so doing, Personal Structures is just as much a reference to the “minimal art” of the 1960s – as it is also at the same time a gesture open for the future, which knows how to seriously and playfully surmount the potency of the contemporary art market (with its preference for photography, video, installation, and figurative-narrative painting). It is extremely exciting, sensitive, internationally connecting, and all the while makes a theme of current philosophical and ontological questions in a language fitting to our times. “Personal Structures” poses questions and delivers statements.

Personal, but not singular.

Structured, but not rigid.

Referential and curiously pointing to the future.